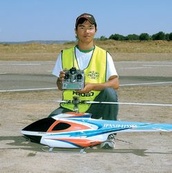 For the FAI/CIAM F3C competition class pilots must perform complex hovering and aerobatic manoeuvres with a radio controlled model helicopter. Each manoeuvre must be executed with high precision and skill in any attitude and under all weather conditions. F3C model helicopters have a weight limit of 6.5 kg, a maximum rotor disc area of 250dm2 and are powered by internal combustion engines with a maximum displacement of 15ccm or electric motors with a maximum battery voltage of 51 Volts. The engines/motors must be adequately silenced to meet a specified noise limit. The on-board radio control equipment, receiving signals from the competitor’s transmitter, actuates the engine throttle, main rotor lateral and longitudinal cyclic pitch, main rotor collective pitch and tail rotor pitch to guide the model helicopter through hovering and aerobatic manoeuvres.

Each competitor’s performance is assessed by a panel of judges who award marks between zero and ten (0.5 increments) for each manoeuvre. Judging is based on four basic criteria: Precision , Smoothness/Gracefulness, Positioning and Display/Size of manoeuvres. Points are subtracted for various types of defects observed by the judges, the severity of these defects, and the number of times the defects are observed.

Each competitor participates in four preliminary rounds, of which the best three flight scores determine his/her placing. The top 15 pilots of all competitors then participate in three fly-off rounds to determine the individual F3C World Champion. The F3C class is also a team competition. FAI member countries may enter a team with a maximum of three competitors as a national team for World- and Continental Championships. The team classification for World and Continental Championships is established at the end of the competition (after the fly-off rounds) by adding the numerical final placing of the three team members of each nation. Teams are ranked from the lowest to the highest, with complete three-competitor teams ahead of two-competitor teams, which in turn are ranked ahead of one-competitor teams.