Canopy Piloting is a high speed discipline involving small and very agile parachutes and highly trained pilots to fly them. The competitions are held over a stretch of water for safety reasons and can be watched from just a few meters away from the ground. The athletes accelerate their parachutes by flying one or more steep turns and then plain out over the surface of the water to enter the course. Three classic disciplines define the champion of canopy piloting, that is Accuracy, Speed and Distance. In the last years, Freestyle, another discipline that shows artistic elements has become popular.

WHAT IS THE OBJECTIVE?

In Accuracy, the competitor must successfully navigate the water section before landing as close to the centre of the target as possible. The maximum score for Speed goes to the athlete flying the course in the shortest time and the best score for Distance will go to the parachutist controlling the canopy to fly the maximum distance. In Freestyle the athletes perform tricks with their body and parachute while in contact with (dragging) the water.

The most difficult tricks done in perfect body position followed by a stand up landing will prove the best athlete in Freestyle.

HOW IS IT SCORED?

The 3 classic courses are all 10 metres wide and the athlete has to pass the entry gate below 1.5 metres with part of his body to start scoring. For Freestyle the water area is the playground.

In Accuracy water points are earned when a competitor drags his foot through an imaginary line in the water between markers. All land points are collected if the athlete lands standing up in the central zone which is one metre wide and two metres long. For landing in other zones or not standing the landing penalties are awarded.

The Speed course describes a carve of 75° and is 70 metres long. The time is started by breaking an electronic beam across the entry gate of the course. The competitor's time is stopped as they break a second beam across the exit gate and their time is measured to thousandth of a second. The world record for this course has an average speed of 124 km per hour.

For Distance the athlete starts at the entry gate and keeps his canopy flying as far as possible. The distance is measured from the entry gate to the first point of contact with the ground. The world's best athletes have shown flights up to 222 metres.

Freestyle is showing pre declared tricks while flying at high speed in contact with the water and landing in a stand up on the shore. This is scored by a panel of judges considering the difficulty of the trick in combination with the execution and the artistic style.

Canopy Piloting is a fairly new sport, made possible by the development of smaller and faster canopies in the mid 1990's. The discipline was originally called "blade running" but soon evolved into the format used today.  Competitions are held over a stretch of water for safety reasons because of the high speeds involved – at the same time creating spectacular action as the parachutists whizz across the surface of the water, leaving a plume of spray behind them.

The first World Championships in Canopy Piloting took place in 2006.

The first World Championships in Freestyle took place in 2018 in Wroclaw, Poland. 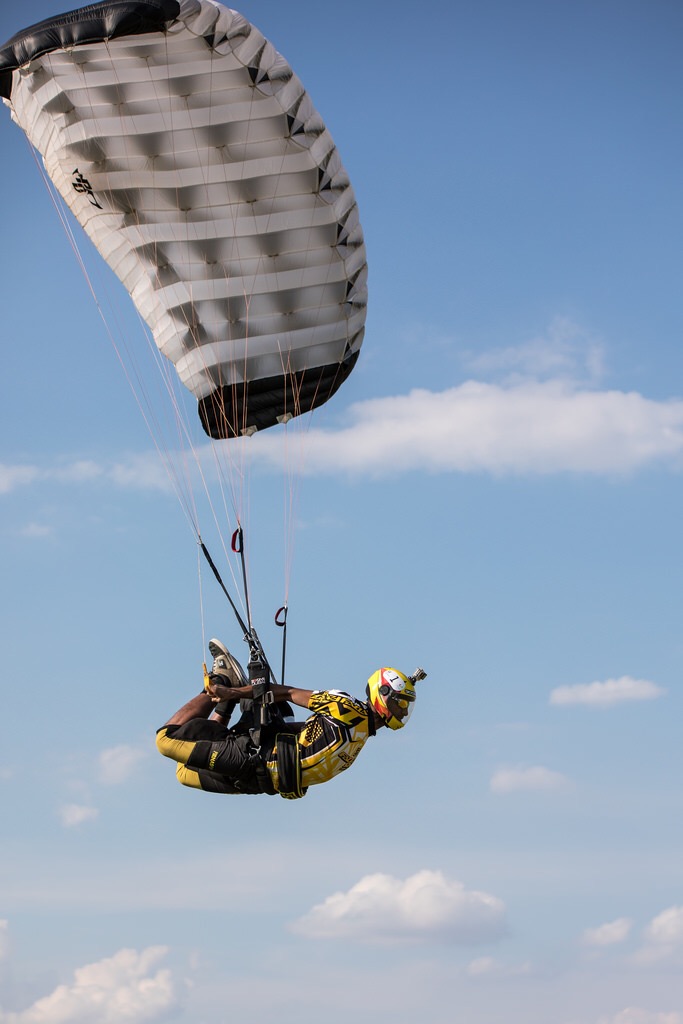