Ben Murphy is the ‘rookie’ of the Master Class in the Red Bull Air Race World Championship 2018 season, but don’t let that word rookie fool you.

This British former military pilot has been flying for decades and spent five years in the world famous Red Arrows, the British display flying team. Two of those years were as leader. During that time he amassed 1,500 hours of display flying over 480 public displays.

We caught up with Ben, 43, at his race hangar during the final of the Red Bull Air Race World Championship 2018 in Fort Worth, Texas.

What have the highlights been?
The last race in Indianapolis – getting through to the final four. If we'd looked at our goals and aims at the start of the season, to have got through to the round of 8, that would have been an achievement, and in fact we did it in our first race. To then get to the final four, well that's a step that we didn't think would happen in the first year and we managed that in Indi. The team was ecstatic, our sponsors and fans were ecstatic. The only person incredibly annoyed was me, because we should have been on the podium. It's important we keep our sights firmly up high. 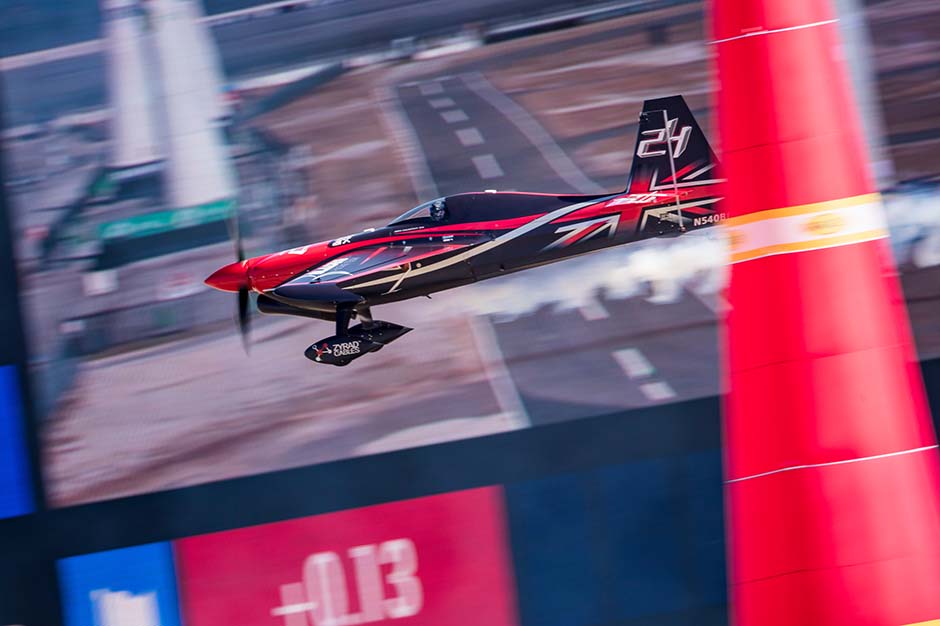 How do you make the transition from Red Arrows to Red Bull Air Race?
If you look at the backgrounds of most of the guys around us, they've all come from a competition Aerobatics background, where they have been flying these sort of aeroplanes for years. Until I joined the Challenger Class I had literally had half a dozen hours in a plane like this. So that was the biggest challenge for me, learning to fly these aeroplanes well. But there were so many other similarities that you bring across from the Red Arrows. Performing in front of lots of people, public, media, you're very low to the ground, very strict safety regulations. We've made that transition quite well.

Did you apply to the Red Bull Air Race or did they come to you?
When you leave the Red Arrows you think, 'What can I do that would better that?' And there isn't much, but this certainly could. I made a few enquiries and got involved in a few initial chats with Red Bull. Of course from Red Bull's perspective it's the safety aspect, they don't want to take a risk on anybody who wouldn’t be able to do it safely. It’s been a good fit.

All the Aerobatics pilots say flying in the Air Race is not the same...
No it's not. There is obviously the racing element, and the competitive element. You have to balance that against the safety aspects as well.

Tell us a bit  about how you got into air sports and aviation?
My route in was through the military. I did 16 years in the Royal Air Force. But I started in the same way as many, as a 10-year-old cadet taking his first flight in a Chipmunk. When I left the military I joined The Blades, which meant I then competed in the World Aerobatics Formation Championships in China, and won that, so that was the first hint of competitive spirit coming through. So when this opportunity arose I had to go for it.

How does being in the Master Class compare with the Challenger Class?
I think my experience was completely different to most. These guys all come from competition Aerobatics where it is just you and the aeroplane and nobody else. You do it all yourself. And this is what the Challenger Class is – Red Bull provide the aeroplane, then it's just you the pilot. When you move to the Master Class you are surrounded by a team and many other elements that come into play. Not just the team members, but sponsorship, management, logistics. But for me, that is exactly what I was used to from the Red Arrows.

I lead the Red Arrows, which is 13 aeroplanes, 100 odd people, so for me the weirdest bit was actually being a Challenger pilot. Moving from the Challenger Class to the Master Class was a breath of fresh air, because it was like, 'Now I'm back in the environment that I know!’ And I think that has shown to be honest. The way I fly now in the Master Class is certainly more confident and relaxed, because I know that I've got the team around me doing their job.