Kanellos Kanellopoulos, a Greek cycling champion who became a record-breaking aviator, has unveiled a plaque to the historic 1988 human-powered Daedalus project in Greece.

Daedalus was a unique, human-powered aircraft designed and flown by a team at the Massachusetts Institute of Technology in 1988. The team's aim was to echo the flight of Daedalus from Ancient Greek mythology and fly between the islands of Crete and Santorini – a distance of over 100km.

Powered by a 3m propeller and weighing just 31kg, Daedalus required extreme fitness to fly, as the propeller was turned by leg-power alone.

Kanellopoulos was one of five top-level cyclists who were part of the MIT team and was "on shift" when the perfect weather needed for the flight appeared. 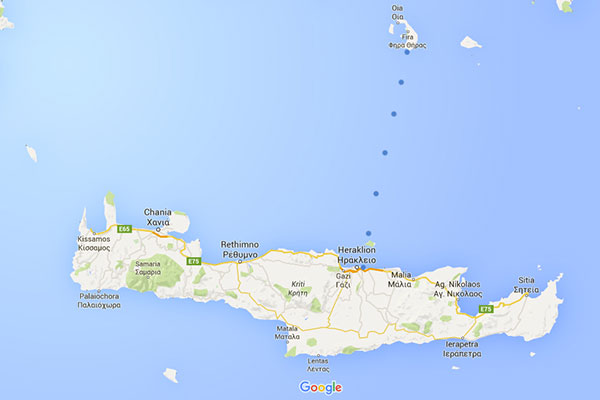 Setting off at 7am on 23 April 1988 Kanellopoulos powered and flew Daedalus for the next four hours, crossing 115km of open sea. In doing so he set two FAI world records that still stand today.

A plaque commemorating the record-breaking flight was unveiled at 6.30pm on Friday 10 June 2016 on the Greek Air Force base in Heraklion, on the northern coast of Crete, Greece’s largest island.

The plaque marks the spot where the plane took off on its record-breaking journey. It was unveiled in the presence of the FAI Executive Board, presidents of FAI Member Countries and Presidents of the FAI Commissions who were in Crete for meetings.

Also in Heraklion was the project’s original team leader, John Langford. A student at the Massachusetts Institute of Technology at the time, he headed up the 40-strong team that got Daedalus into the air. 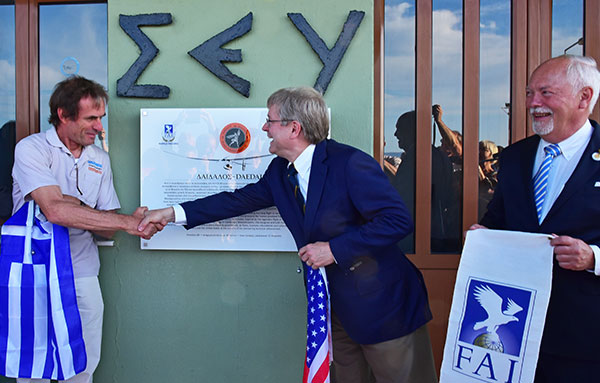 Accompanying the pair from the original Daedalus team was the Secretary General of the Hellenic Aeronautical and Airsports Federation, Antonis Papadopoulos.

Papadopoulos, who is also President of the FAI Aeromodelling Commission, said: “It is an honour to be here today, welcoming back two aviators who mean so much to Greece.”

He added: “As a Greek it is an important moment. Since Greece was involved in this project with the military and with the government at the time, it is important that we mark it in this way."

The myth of Daedalus and Icarus is well known. In it, Daedalus and his son Icarus are held captive on the island of Crete. To escape, Daedalus builds wings, and together they fly across the Mediterranean.

However, overcome with the beauty of flight Icarus flies too close to the sun, melting the wax that holds his wings together and plunging into the sea. Daedalus, however, maintains his steady progress and reaches Sicily and freedom.

Back in 1988 the modern day flight of Daedalus set out to echo this compelling myth.

Setting up camp in Crete for six weeks in the spring of 1988, the Daedalus MIT team knew that they would need perfect, almost dead-calm conditions for the flight. 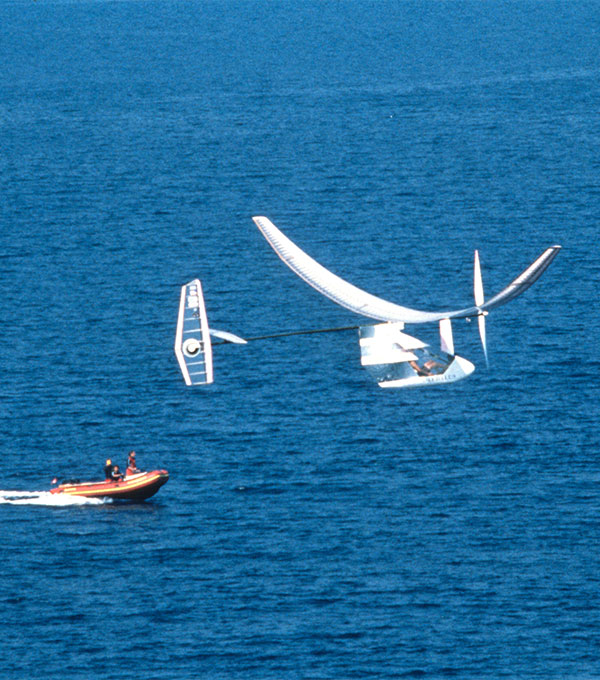 Among the team of 40 were five pilots, all chosen for their cycling ability.

“Kanellopoulos used to be a Greek cycling champion,” explained Papadopoulos. “It happened that he was on shift, so to say, that day. He was the lucky one.”

A revolving rota saw each pilot training and eating up to 7,000 calories a day in preparation for the flight.

Kanellopoulos then spent the next four hours powering the ultra-lightweight human-powered plane through the air – the "energy equivalent" of cycling for six hours at 37km/h (23mph).

Flying low he was accompanied by a flotilla of boats including a patrol boat from the Greek Navy, two coastguard cutters, two media boats, a command boat and three inflatables.

Each turn of the pedals turned the propeller one-and-a-half turns. Slack off even for a second, and the aircraft would dip towards the water. 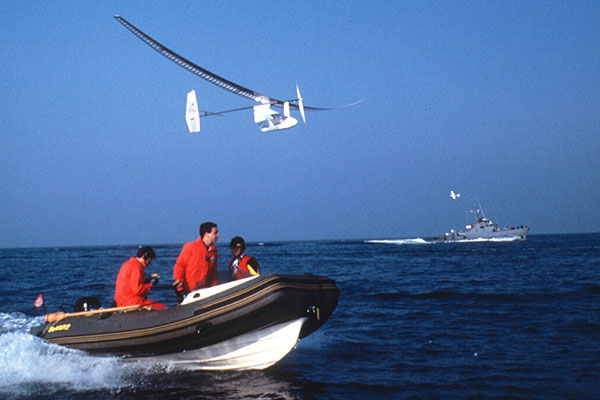 Approaching the coast of the island of Santorini after nearly four hours in the air, Kanellopoulos started to turn the aircraft into wind, for a landing along the beach.

However, according to reports from those who were there at the time, at the last instant Daedalus’s ground-speed dropped, until the aircraft was almost hovering.

Then, a gust of wind lifted one wing, there was a loud crack, and the carbon fibre in the tail boom visibly twisted and splintered.

It was game-over in the cockpit as the control stick went limp. A second crack saw the right wing fail, dropping into the sea. The aircraft rolled to the right, and then touched down in the water, just a few metres from dry land.

Inside, Kanellopoulos pulled his feet from the pedal stirrups and dived out into the water. He was helped ashore by team mate Grant Schaffner, a fellow pilot, and Frank Scioscia, also a pilot.

The flight of the Daedalus was a remarkable and historic event in aviation history. Ahead of its time it used cutting-edge materials, some of the finest engineering brains of the time, and the fittest cyclists, to prove that human-powered flight was possible.

That the two world records still stand shows just how remarkable the Daedalus project was.