August 2019 marks the 90 year anniversary of the first round-the-world airship journey, made by German pilot Dr Hugo Eckener and his passengers in the rigid airship, Graf Zeppelin.

The Graf Zeppelin was already famous, having already made a 71-hour, 6384.50km journey in 1928, making the FAI record books for distance and duration in an airship; records that still stand today.

In 1929, American media mogul William Randolph Hearst part-sponsored the Graf Zeppelin to make the first round-the-world trip by a passenger carrying airship. He insisted that the trip began and ended in the US, and so the airship departed from Lakehurst, New Jersey on 8th August 1929 with Dr Hugo Eckener at the helm.

It was the first round-the-world trip to carry passengers. A total of 20 men and one woman - Hearst reporters (including journalist Lady Grace Drummond-Hay), a millionaire socialite, an Australian explorer, US Naval representatives - joined the crew of 40, including physicians, meteorologists, navigators and engineers to make the record-breaking journey.

The cost of the flight was also offset by carrying souvenir mail. This letter for example, cost what was - in 1929 - a very highly-priced $3.55. 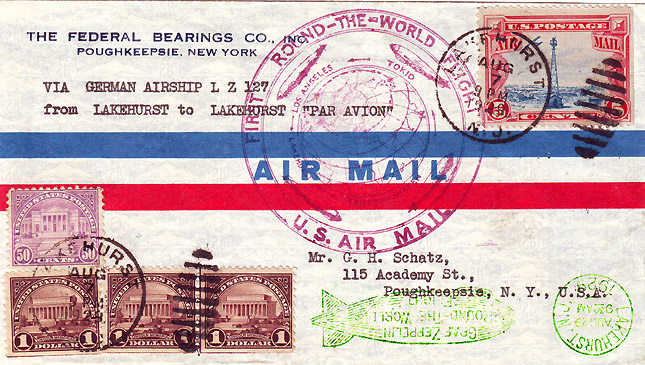 The airship was composed of a lightweight metal frame covered by fabric and was 236 metres in length. Inside the structure were 12 hydrogen-filled buoyancy tanks, fuel tanks, work spaces and the crew quarters. The gondola which was mounted below this structure contained the flight deck, a sitting and dining room and passenger cabins. Its maximum speed was 128kmph (80mph).

The airship flew from Lakehurst, New Jersey, stopping in Friedrichshafen, Germany (where the airship had been constructed) to refuel, then over Siberia to Tokyo where the Eckner took tea with Emperor Hirohito. From there, it flew over to Los Angeles with a strategic fly-by of San Francisco's Golden Gate Bridge at sunset. Taking off from Los Angeles, it then continued across the deserts of Arizona and Texas back to Lakehurst on 29th August.

To bring the airship back ‘home’ to Germany, it made a final stretch form Lakehurst to Friedrichshafen from 1-4 September 1929.

The flying time totalled 12 days and 11 minutes and received a huge amount of attention across the globe. It was also the first time that the Pacific Ocean had been crossed by any kind of aircraft. The entire circumnavigation took 21 days, 5 hours, 31 minutes.