2019 has been a great year so far for Austrian aeromodeller Gernot Bruckmann. He became the first ever pilot win a 4th gold medal in his class.

His incredible accuracy in guiding his aircraft through a complex pattern of manoeuvres during the FAI F3P World Championships for Indoor Aerobatic Model Aircraft in March this year meant that he didn’t lose a single round.

These finely-honed skills won him his fourth gold medal in the Aerobatics category, something no other aeromodelling pilot has ever achieved.

Commenting after his win, Gernot admits he had high hopes for success this year:

“From the start of the 2019 indoor season, my big goal was of course the World Championship and to win it for the fourth time in a row. I prepared a new plane with new equipment to make this possible.”

Gernot’s new plane is called the Pandora F3P and is a new version of his old Trivia and Trivia 2.0 which he used in the world Championships in 2015 and 2017. Constructed from carbon rods, it is then covered with Mylar and painted. Pandora is 105cm long and weighs 46 grams, with a wingspan of 89cm. 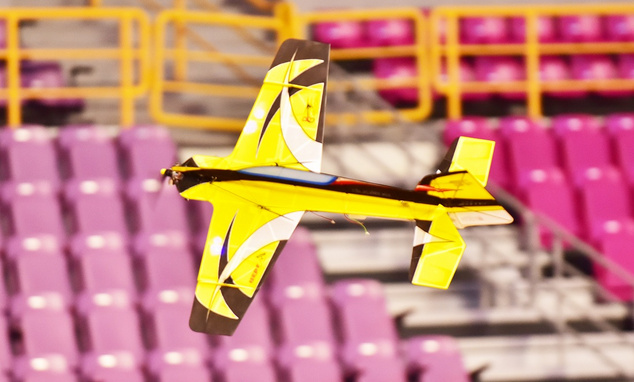 The gold medal Gernot won in this class wasn’t the only medal he took away from the competition. Gernot also won two silvers: one in the F3P AFM (Aerobatic Flying to Music) class and the other in the team class with his fellow Austrian team-mates.

So, to what does Gernot owe his success? The answer is a mix of nature and nurture.

Born to two aeromodelling parents, you could certainly say that his passion for the sport is in his genes. As a child Gernot spent many, many hours on the airfield, watching and playing with model aircraft. He first took the controls of a plane aged just six years. 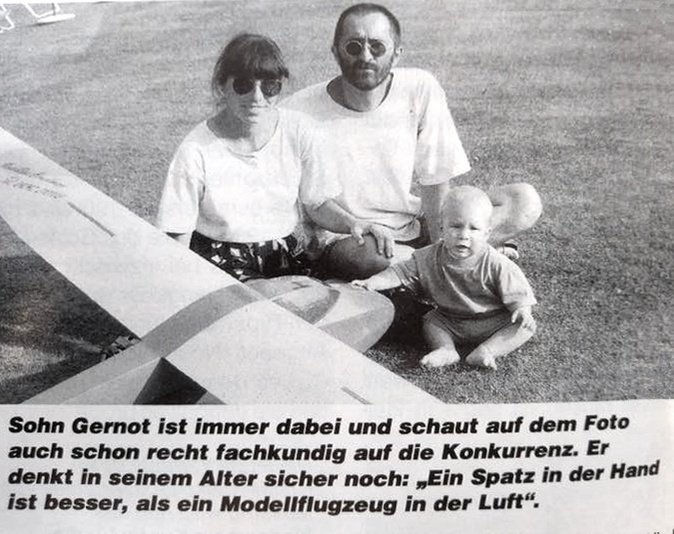 A young Gernot and his parents: "I would not be where I am now without their support."

Observing the flight patterns and the behaviour of the aircraft from such a young age must give a huge advantage to a potential pilot, but it’s not only this that has led to Gernot’s success: his regular flight schedule ensures that practice makes perfect.

“I do have a lot of experience from many years in competition, but without performing many flights beforehand it would not be possible to win. This year I started preparing from the beginning of January until the contest and was practicing in the hall several times a week.”

Like most sportspeople at the top of their game, Gernot puts a lot of pressure on himself to perform better and better each time:

“During the competition my pressure on myself was really high, because I really wanted to win. I didn´t lose a single round so I was extremely happy with the result that I could win it again for the fourth time.”

Having inherited his passion for aeromodelling from his parents, at the age of 28, Gernot recognises his legacy and wants to pass it on to the next generation:

“I hope that more and more young people will become interested in this great sport so that it will continue into the future with great new pilots.”

Will one of the next generation of aeromodellers be inspired by his success and take his spot on the podium at the 2021 FAI F3P World Championships for Indoor Aerobatic Model Aircraft, or will Gernot be able to bring home to Austria a 5th gold medal? We will have to wait and see, but in the meantime we wish Gernot many hours of successful training!