When “Grandpa Flieger” had his grandchildren to visit, he wasn’t sure how best to entertain them. But as a model pilot and educator, an idea sprang to mind: tinkering with beginner model aircraft, to grasp the basics of aviation!

Grandpa Flieger, also known as Klaus Strienz, was a Delegate to the FAI Aviation & Space Education Commission for the German Aero Club from 1999 to 2011 and is a passionate advocate for getting young people interested in aviation. He has led educational projects such as demonstrating aerodynamics to children at an airfield, and constructing model aircraft in a school setting.

Here Klaus shares his experience for the benefit of other grandparents!

“As an introduction, I chose the well-known hand propellers that you can buy in toy shops. After initial failures, the children gladly accepted the advice that you have to turn the ‘inclined surfaces’ so that they rise into the air or push air downwards. But which way do you have to turn it?

Some children will quickly get the "hang of it" and help the others, and even adult observers (parents!) are surprised when you turn the rotary propeller around and make it fly with the right turn.”

After this discovery of flight, the next stage was to use the idea to make a helicopter.

“Paper helicopters can be cut out quickly with paper clips for weights, and you can experiment with different heights for launching. I asked the children ‘why it can fly?’ and we discussed how it can take off from the ground and rise into the air: the wings move air downwards and the helicopter then flies.”

The idea was developed:

“From the flight model inventory, half a wing was used. By turning around the body axis, the wing will lift as the speed increases. The children quickly realised that this was only successful with a certain direction of rotation. At this point, one can compare the curvature of the wing top with the wings of birds (storks).

It is fascinating that a human being, a certain Mr. Lilienthal, actually copied this idea from the storks in the Berlin area about 140 years ago and used it successfully.”

“Now followed the transition to the "right" aircraft. Instead of the wings, turning quickly, they are accelerated by the aircraft engines on a special road - the tarmac runway - until the aircraft takes off. We put the two wing halves together and simulated the take-off on the runway. With success! The wings of the model airplanes quickly tilted upwards. The children "grasped" the buoyancy in a sporty and playful way!”

“For the next step, I used the elastic band powered plastic gliders available in shops. After an introduction to the right throwing technique, the children quickly learned to throw the models so that their partner could catch them. The children were enthusiastic!  Working this way with a partner requires a lot of fine motor skills.”

Building their own model

Grandpa Fleiger recommends that if young visitors can already read and have time, they can progress to constructing beginner flight models made of balsa wood, available in specialist shops or on the internet. His advice?

“Let the children build as independently as possible. Only help when asked. The joy is much greater when the young aircraft manufacturer manages their task successfully and independently. Grandpas that build the model for their grandchildren can expect their assistants to quickly become bored!” 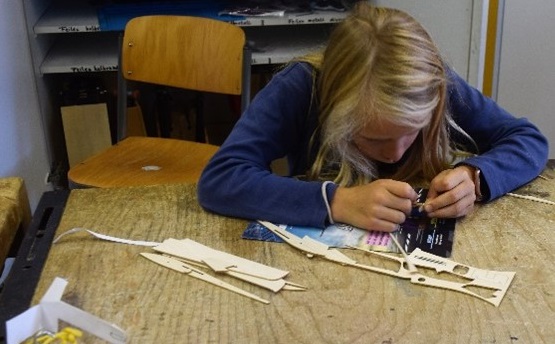 “The project took a total of about three hours. The children were enthusiastic about the varied tasks and sporty fine motor skills and technical understanding were promoted at the same time.  And the children now know why planes, similar to the birds, fly.”

Klaus Strienz would be happy to hear about others' experiences with children and model flying. Click below to contact him directly: