The FAI Environmental Commission (EnvC) has established the Angelo d’Arrigo Diploma, a new FAI environmental award which aims at recognising and promoting major contributions in the field of environmental and sustainable development, in accordance with the development of a philosophy and a vision of sport aviation that increasingly wants to be respectful of the environment that surrounds it.

The diploma is to be presented for the first time in 2014 and may be awarded to individuals or organisations that have contributed significantly to the defence of and respect for the environment affected by air sports. The activities may include: scientific research, private, public or commercial events or activities, developed or promoted directly by pilots, sport flying clubs, FAI Members or public or private bodies as small and medium enterprises. Only one Diploma shall be awarded each year. 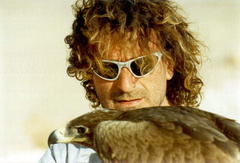 The award was named after Angelo d’Arrigo, an Italian Microlight and Hang Glider pilot (1961-2006). D’Arrigo flew with eagles and all kinds of birds of prey which earned him the nickname of “Birdman”: by following the migratory route of desert hawks he flew in the Sahara and across the Mediterranean as well as crossing Siberia with Siberian cranes. He also flew over the summit of Aconcagua and in the Everest region up the Western Cwm, very close to the summits of Everest, Lhotse and Nuptse.

EnvC President Pierre Duval said, "The Angelo d'Arrigo Diploma is a unique opportunity to put under the spotlight persons or organisations which prepare the future of our sports. Through this distinction, we would like to single out those who dedicate their action to a better integration of our sports into a human and natural environment, making our sportsmen, sportswomen and competitors part of a cleaner and environmentally friendly world. We need these silent heroes of greener skies who simply are the pioneers of this century’s aviation development."

The Angelo d’Arrigo Diploma, like all FAI medals and diplomas, will be awarded each year at the Opening Ceremony of the annual FAI General Conference. Nominations may be made by any of the following nominating authorities: FAI Members, FAI Executive Board, FAI Commissions, FAI President, and FAI Secretary General.