For someone who holds more records, cups and accolades than most sportspeople, British pilot and adventurer David Hempleman-Adams says that he is more motivated by pushing the limits of the equipment and the team than the prospect of a gleaming medal:

“Records are the last thing you’re looking for… It doesn’t matter if you fail, just get out there!”

It’s a motto he has certainly held throughout his adventuring career. Setbacks are an inevitable part of pushing the limits of your equipment and team, but for someone who has endured freezing temperatures, sleep deprivation, been shot at by Inuits, encountered polar bears, experienced Concorde’s sonic boom and survived on tea and sandwiches suspended for days in an open wicker basket, his perseverance has meant that he has clocked up an impressive number of records – 47 with the FAI.

Perseverance certainly paid off in 1998, when on a third attempt, David reached the geographical North Pole with Rune Gjeldnes. Despite drifting slowing their progress dramatically, they finally made it, making David the first person to achieve the ‘Adventurers’ Grand Slam’ – climbing the highest peaks on all seven continents.

Despite racking up this impressive list of mountaineering achievements, David had an overwhelming feeling that he was following in other peoples’ footsteps rather than forging his own path. The peaks he was scaling had already been ticked off other explorer’s lists: Hillary, Norgay, Meyer, Zurbriggen...

Taking to the skies

David decided to take to the skies in order to make his next record a genuine first – flying over the North Pole in a balloon.

As a boy, David was inspired by reading about Salomon August Andrée, A Swedish explorer who - in 1897 – perished alongside his two crew members after attempting to cross the North Pole in a flight from Svalbard to either Russia or Canada in a hydrogen balloon.

No-one had endeavoured to repeat the expedition since. That is, until David thought he’d “just get out there” and have a go. He learnt to fly a balloon, and – almost as a practice run, with just 30 hours experience – he became the first person to fly across the Andes in a hot air balloon.

Next stop: the North Pole… But even after the success of the Andes flight, there were setbacks for his polar project:

“I spoke to several meteorogists who all said it couldn’t be done; I shouldn’t go. Then I met Luc Trullemans and he went away for three months to research the weather patterns and historical data and he said there was a possibility it could work.”

Luckily for David, it did. He was in the air, in his wicker basket, for a total of 132 hours, and became the first person to fly solo in a balloon over the North Pole, which he describes as a “cerebral experience”. It remains his proudest moment.

Since the North Pole trip, David has pushed himself, his teams and his equipment to the limits and as a result, added many more records and achievements to his list.

It took three attempts for David to become the first person to cross the Atlantic solo, in the open basket, a AM-08 Rozier, which he achieved finally in 2003. He followed this up in 2007, with crossing the Atlantic, solo, in the smallest gas balloon - AA06 - in an open basket measuring 4ft x 4ft. Taking off from Newfoundland, Canada and landing in Nolay, France.

He has also flown a single engine Cessna from Cape Columbia on the Arctic Ocean, the northern most point of North America, to Cape Horn, broken the world altitude and distance records in an airship, and the world altitude record in a Rozier balloon and hot air balloon.

In 2009 David broke the endurance record in the smallest passenger carrying helium balloon (class AA-01) by travelling from Missouri to Oklahoma, which took 14 hours 15 minutes, beating the previous endurance record by six hours.

In 2008 he was part of the first British crew to win the legendary Gordon Bennett cup with Jon Mason, with whom he also won the Americas Challenge (another first – the only British crew to have won both competitions).

In total, David has made thirty Arctic expeditions and has reached the various Poles (geographical and magnetic) a record 14 times. 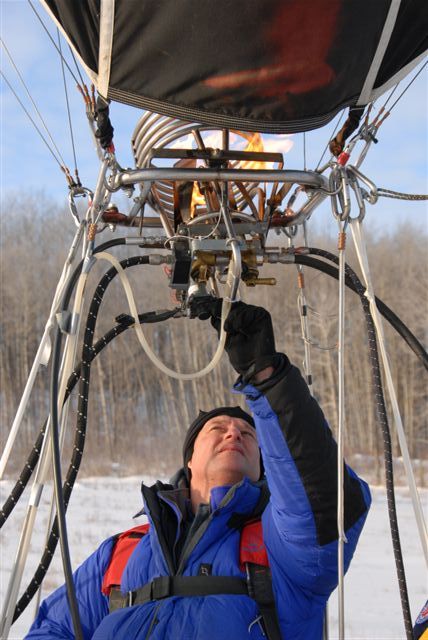 For all these adventures, there’s one essential item that David always takes with him: his worry beads, clearly a lucky charm, as they have brought him home every time. But in all these solo adventures, David must be used to feeling isolated, sleep-deprived and… just a bit lonely?

“I don’t really feel alone on my trips, I’m in extremely regular contact with my fantastic team, and it’s great to know that they’re there the whole time in case I make any silly decisions from lack of sleep. You have to have a team that you can trust.”

David doesn’t train for sleep deprivation. It is simply a combination of adrenalin and communications from his ground crew that keep him going on those long stints in the air, as well as his sandwiches and hot drinks from his little stove.

This ‘bare essentials’ attitude is something that has remained important to David throughout his aviation career. Despite the high-tech comms equipment, meteorological mapping and GPS systems, he continues to enjoy the open wicker basket experience, even when ascending to record altitudes, such as 12,557m:

“I sit on a cool box or a fishing stool and just get on with it!”

More recently, David has been “just getting on with it” at sea. In 2019 he sailed across the Atlantic, solo, and in 2016 he circumnavigated the North Pole in a four-month Arctic sailing trip to highlight the fact that due to ice pack melt, the journey would not have previously been possible.

Climate change is something he feels passionately about, having set up Wicked Weather Watch to raise awareness about rising seas and glacier melt in schools.

“I have reached a veteran age where I have personally witnessed the extent of glacier melt. It is scary, but thankfully the world is waking up.”

He notices that the younger generations are much more environmentally aware and focused, acknowledging that older generations knew what was happening but failed to act. 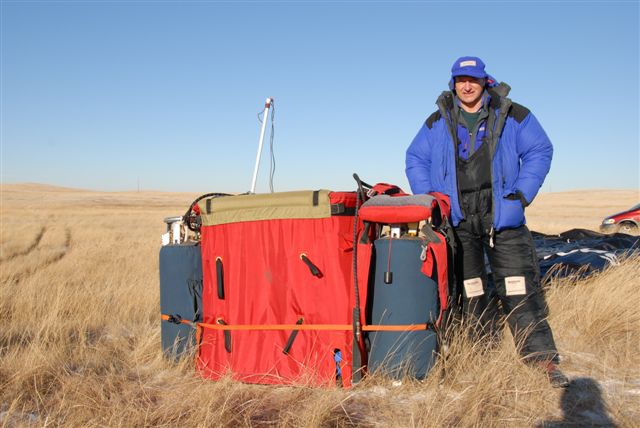 Although David is gradually drifting towards official retirement age, he doesn’t perceive growing older as a setback:

“Looking back, there are certain things that I would never have done. These days I minimise risks and I think I’m braver at saying ‘no’. I’m much more patient!”

David still has many plans for future adventures and enjoys keeping up to date with new equipment developments. In 2020 he is hoping to try a new burner system, and will carry on pushing his pilot skills.

David will also be continuing to support his daughters in their adventures: his eldest has just achieved her pilot’s licence and has her own adventure lined up for next year. But will she continue in her father’s footsteps, or blaze her own trail, as her father did when he floated across the North Pole in a wicker basket? Watch this space!