The remarkable achievement was made in Argentina’s Salinas Grandes salt plain region at over 3000m above sea level, in an aerosolar balloon named Aerocene Pacha which was lifted using only the heat of the sun and the air. The 667.85m distance flight reached an altitude of 272.1 metres above the ground.

The 32 records mark the inaugural entries into both female and general categories for ballooning in the FAI sub-class of AT: ‘a free balloon which obtains its buoyancy as a result of heating air using solar and/or external radiation sources only.’ Click here to view FAI document.

The flight was undertaken with FAI approved observers and an Argentine FAI validated pilot, and the Aerocene Foundation team complied with FAI regulations. 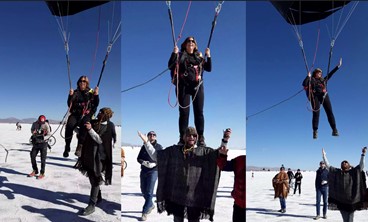 The Aerocene Pacha balloon is made from black SKYTEX™ 38 hybrid fabric and weighs 86kg (envelope). It is capable of lifting up to 237kg, and its 2973m3 volume was inflated with a pedal powered fan system. A specially designed parachute allowed for sensitive control of the balloon’s height.

Utilising lighter-than-air technology, the Aerocene balloon transforms solar radiation into heat by means of its dark colored membrane. The flight at Salinas Grandes was furthermore aided by the albedo effect of white salt flats covering the region. 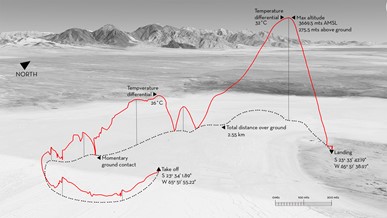 About the Aerocene Foundation

The Aerocene Pacha, which is named after the Andean name for ‘Earth Mother’, is part of a global project led by artist, architect and inventor Tomás Saraceno who in 2012 asked meteorologist Lodovica Illari at the MIT Department of Earth, Atmospheric and Planetary Sciences whether it would be possible for a solar balloon to circumnavigate the earth. The resulting collaboration produced the Aerocene Float Predictor App which is a global forecasting system using open meteorological data to predict flight paths of aerosolar sculptures circling around the globe. 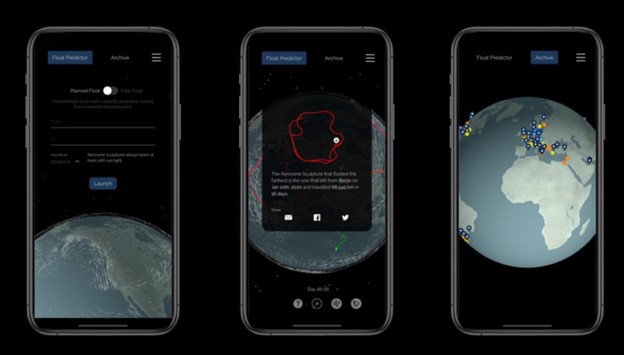 The Aerocene Foundation hopes to draw attention to the environmental benefits of solar ballooning as well as community spirit. The Aerocene community is active in 126 cities, composed of community members floating over six continents in forty-three different countries, participating both on the ground and in the fields of art, science and politics. With 7,060 minutes in the air free from carbon composed from 110 tethered flights, 15 free flights and 8 human flights, and with thirty-three Museo Aero Solars built worldwide.

“Aerocene Pacha and all Aerocene flights have one common goal in mind, they challenge us to connect together and help to change our habits, not our climate.”

With the Aerocene community, Saraceno is currently working on a new design that would allow for multiple passengers to fly completely free from fossil fuels. 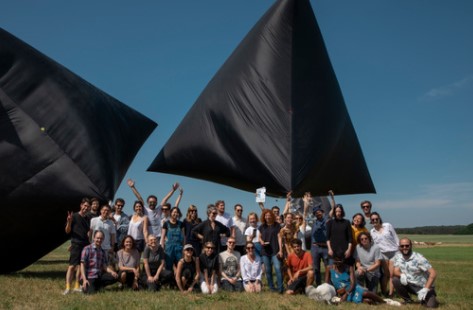 Solar balloon ‘backpacks’ are available for flights to be made around the globe. The Fly Aerocene Pacha record flight was made in collaboration with native communities from the salt desert region which are their ancestral lands.

Aviation has always been at the forefront of new mobility concepts and innovations. Harnessing the Earth’s natural resources has been fundamental since the dawn of human flight, and developments are progressing rapidly in the 21st century as engineers and inventors seek to find new ways of taking to the skies using cleaner energy.

A brief history of solar balloons

The simplicity of a solar balloon draws upon the heated air expanding inside the balloon which has a lower density than the surrounding air and thus provides buoyancy. This concept is also adopted by hybrid balloons which use helium and heated air, with strong solar elements included in the construction to extend duration and contribute to a more efficient flight.

On a solar balloon, to aid the heating of the air inside, a dark coloured skin is used, as in the Aerocene Pacha design. If the balloon flies above a white or light colored surface, the internal temperature of the balloon is further augmented.

The first successful solar balloon design is credited to architect and inventor Dominic Michaelis in 1972 whose double envelope design was built by Cameron Balloons of Bristol, UK.  In 1981 this solar balloon was used for a UK to France Channel crossing by renowned balloon pilot Julian Nott.

But before this, the first passenger solar balloon flight was made on 1 May 1973 by Tracy Barnes in his balloon 'Barnes Solar Firefly Tetrahedron' for which he was awarded the highest accolade from the Balloon Federation of America (but not the FAI) for a notable first flight for the solar balloon, as well as his important contribution to science and safety.

Prior to the flight of Aerocene Pacha, no solar balloon had officially registered a world record into the FAI sub- class of AT, as they had either used a burner along their journey or flew with uncertified balloons.

The solar balloon ideas were developed into the 80s and 90s for scientific uses, such as for long duration stratospheric flights. More recently in January 2011, the Ballon ORA – the first 100% solar weather probe - launched from the French Antarctic Station. Studies have been undertaken by the California Institute of Technology to investigate the possibility of solar balloons to explore Mars, Jupiter, and Saturn.

Images courtesy of the Aerocene Foundation.