783.9 km: Father and son break the Distance World Record in a microlight

The FAI has recently ratified the admirable performance achieved by father (Colin Fargher, 55) and son (Louis, 19). Together, they broke the world record for the Distance in a straight line without landing* onboard a Skypper Nuvix LOR 75 microlight, manufactured by Air Création. 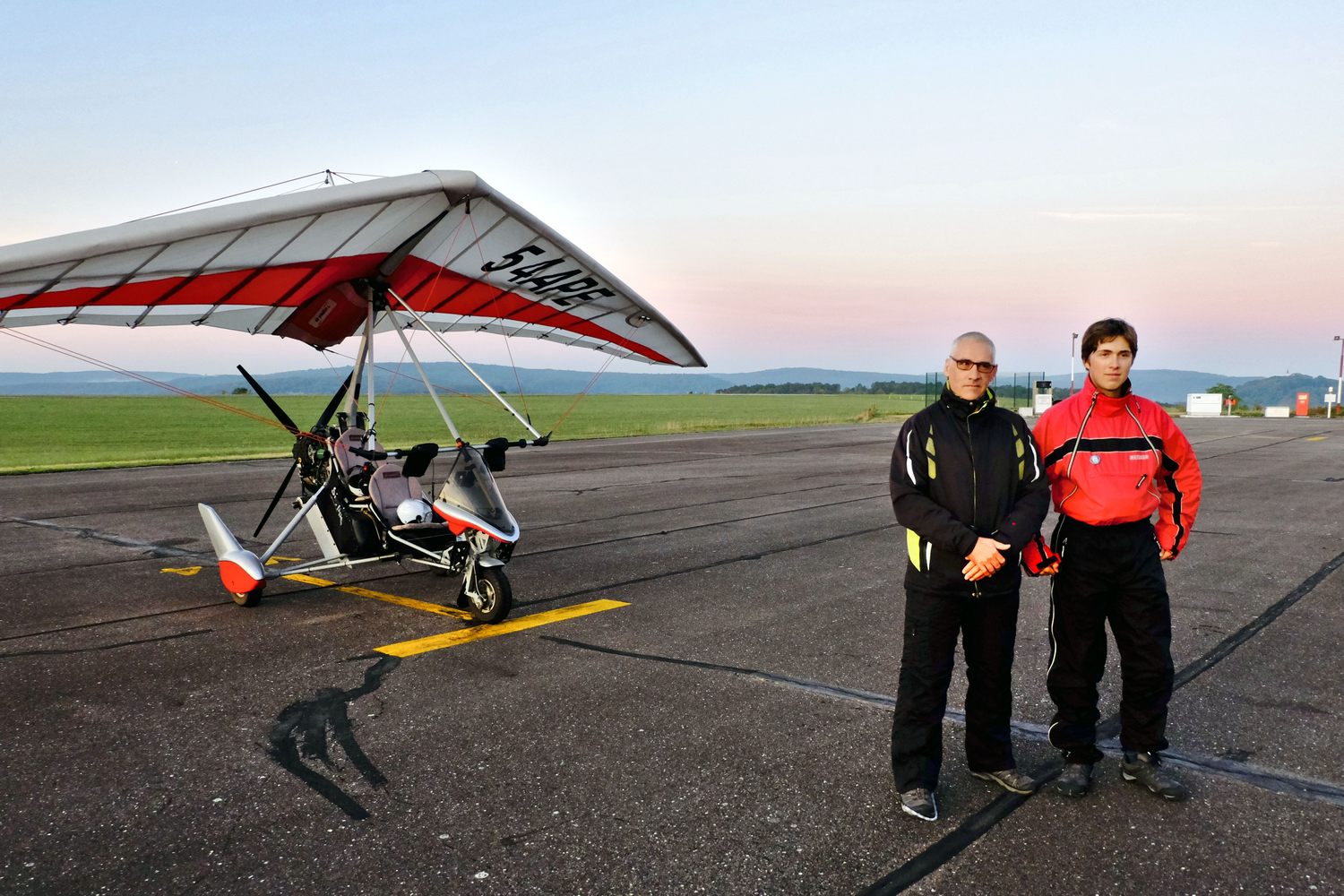 Three FAI Officials made sure that all the elements required for the ratification were present and in accordance with the FAI Sporting Code. 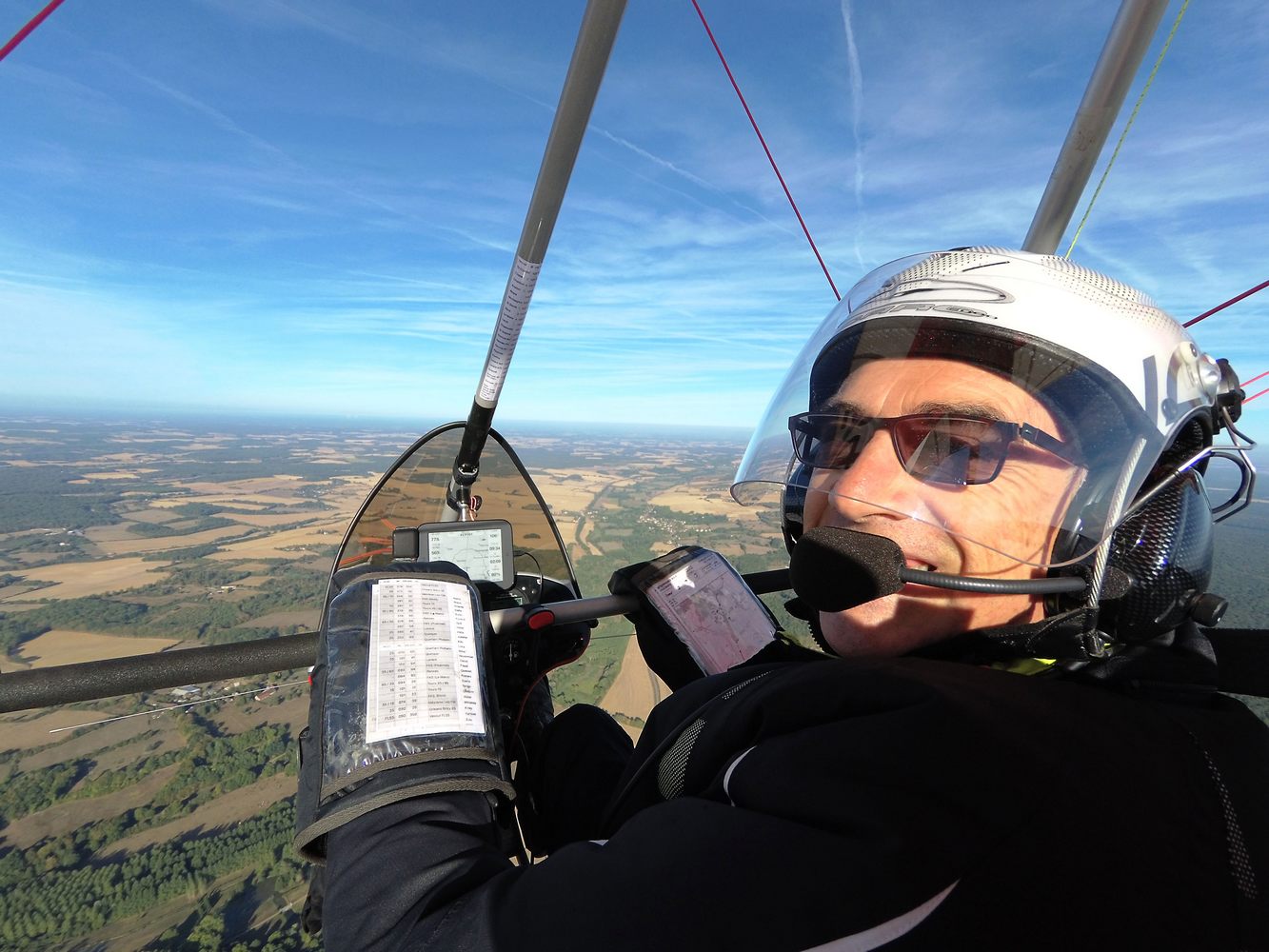 A Dream: the Origin of the Project

The origin of the world record project dates back to when Colin Fargher was a kid in awe of the pioneers of aviation and space exploration. "For a long time I had dreamt of making a big flight. One of my earliest memories is of my parents waking me to watch Neil Armstrong touch down on the moon in 1969. I’ve read books and watched films about the great pioneers of aviation and visited the west of Ireland, where Alcock and Brown first completed a crossing of the Atlantic in 1919."

Colin became a pilot 1986, when he took up hang gliding. In 1998, he began paragliding after moving to France, where he also learnt to fly microlights in 2008. "Though I have remained an active pilot every year for the past 34 years, flying had to take a back seat while raising a young family for a long time. But now, both my children and my wife have learned to fly too. Louis began paragliding in July 2018 and has some experience flying with me in microlights, but he is not yet a qualified microlight pilot."

Dates and years carry a special meaning for Colin Fargher, and in particular 2019. "Not least for me the 50th anniversary of the first moon landing. So, I thought it was time to make good on the inspiration my parents had given me all those years ago. I knew that together with my son Louis, we had the ability and experience, and we had a good aircraft. So I began to prepare the machine, make test flights and prepare the navigation. From our airfield in Vesoul, the furthest we could go in one direction whilst staying over mainland France was to the Atlantic coast in Brittany, so we set our cap for Quimper."

The "preparation and the waiting" proved to be the most challenging aspects of the project. “All summer we waited, but the weather in France was very hot, often windy and turbulent. Then at the end of the first week in September things started to look better, with a prediction for high pressure over Scandinavia and light easterly winds in northern France. By the beginning of the following week we were pretty sure to have good conditions for the weekend of the 14th and 15th and made the decision to go.

The most difficult part of the flight? "[It] was probably after crossing the halfway point near the Loire Valley. It was the last of the really hot weekends of the summer 2019 and we were obliged to descend quite low due to airspace restrictions and therefore into some very strong afternoon thermic activity. Strong thermals in themselves are not such a big problem for hang glider and paraglider pilots such as myself and Louis, but at low level in a 400+ kg machine at 90km/h it can be a little disconcerting. Although a flex-wing microlight is perhaps one of the simplest and most intuitive aircraft to fly, it is also the most physical. In order to stay on good form, Louis and I took turns to eat, drink and even pee whilst helping each other control of the aircraft. Throughout the afternoon we fought through the thermals and then the convergence over the Bretonne peninsula. Above 3000ft this was bearable, but at lower levels, at certain moments, we both needed all our strength to keep the machine on course." 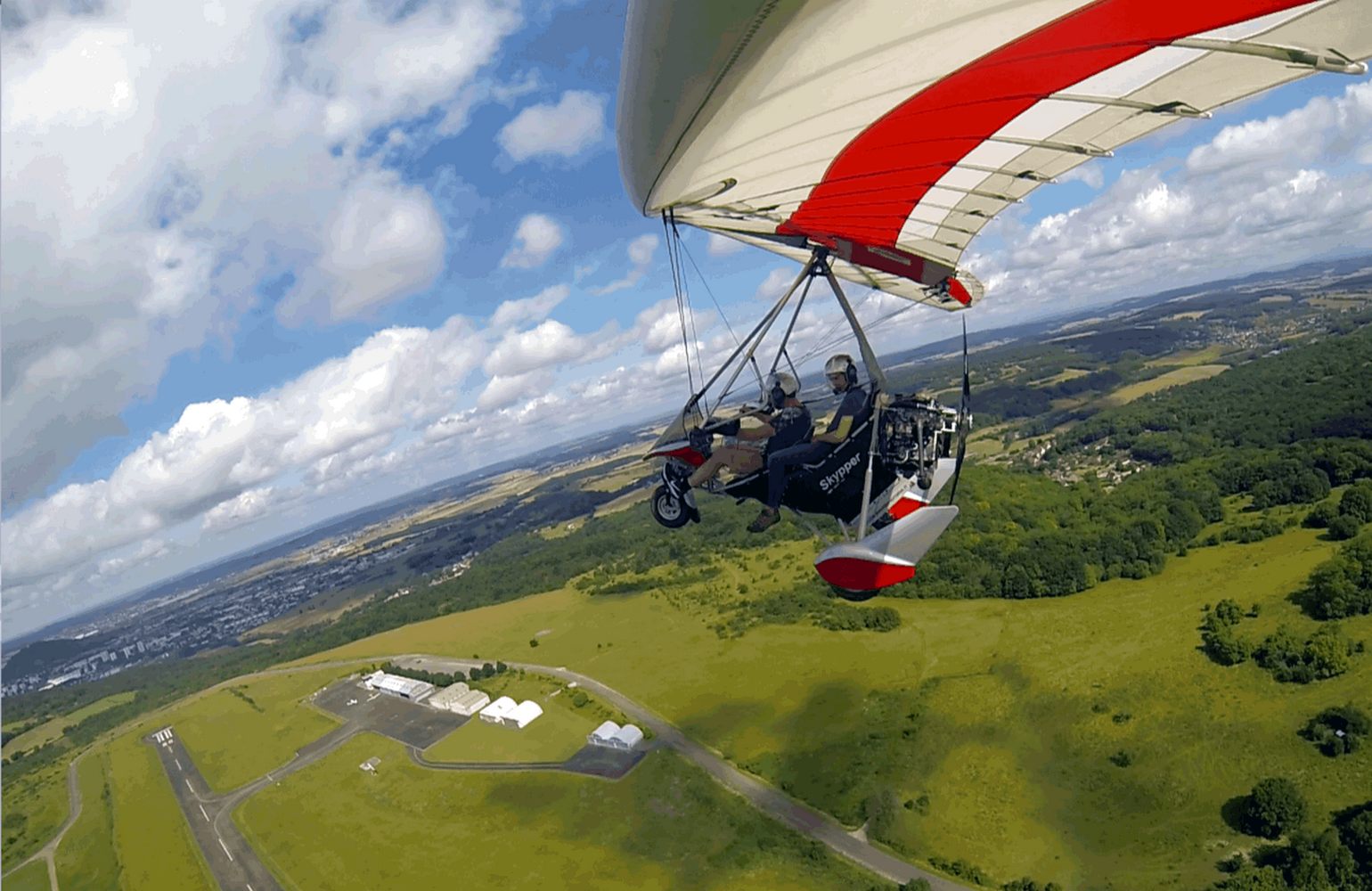 However, it was not all about technology and weather conditions. The psychological side also plays a big part in this success, which Colin Fargher acknowledges: "Mentally, it was tough at times too. Our initial estimation of fuel consumption proved to be somewhat inaccurate. After the first 200km we had consumed much more fuel than estimated. This was due to the aircraft being heavy with the weight of fuel. As we progressed our fuel economy improved, but it wasn’t until we finally saw the Atlantic coast in the distance that we began to relax." 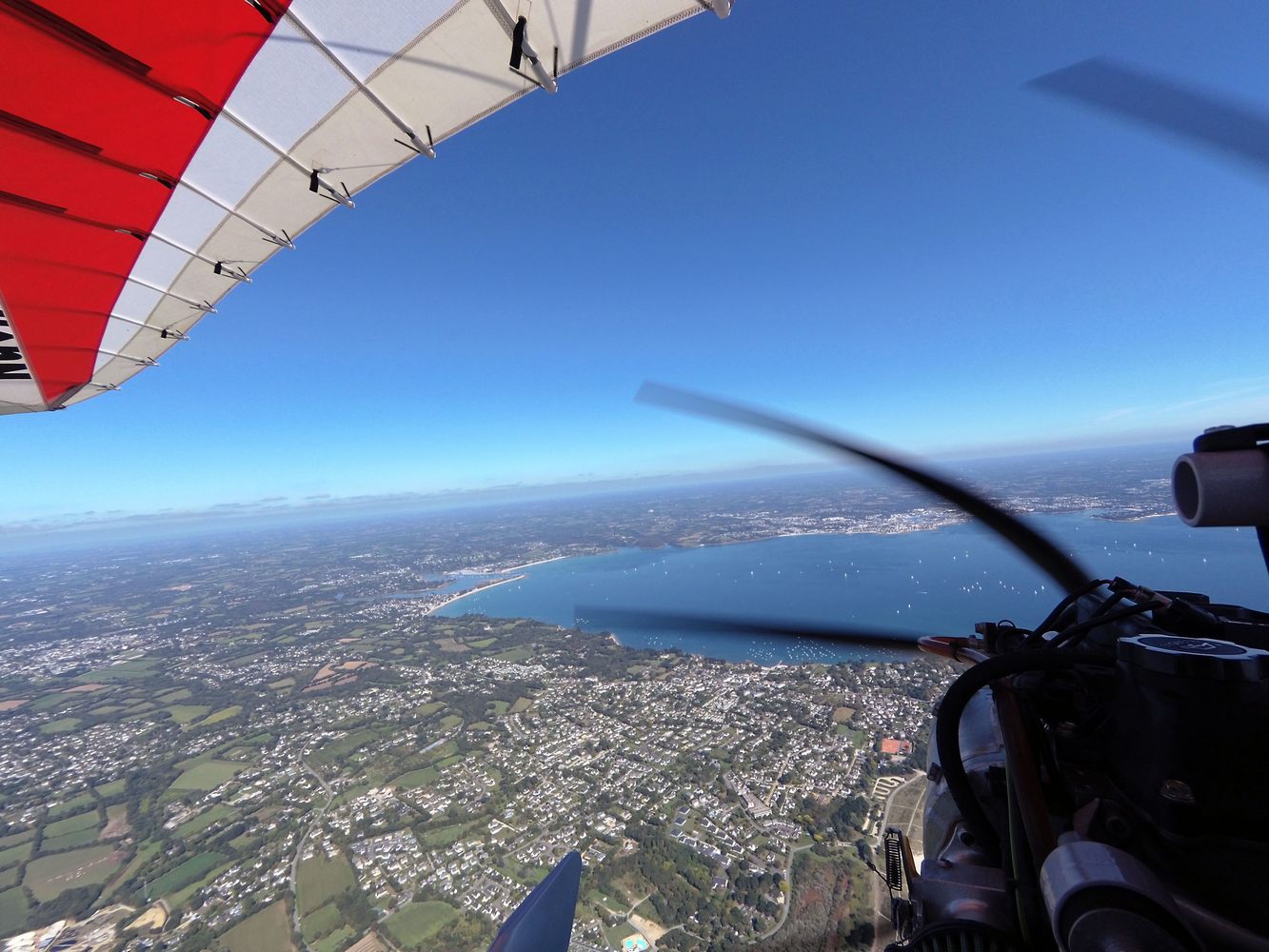 Colin is a British national who has lived in France for many years. For him, "arriving over the beautiful Atlantic Ocean was an incredibly emotional moment. Being the son of a small Celtic nation in the middle of the Irish Sea, it was for me, a sort of homecoming. Louis and I shook hands, wooped and screamed with joy knowing we had made it."

Since returning to Vesoul, Colin and his son Louis have been invited to speak to schoolchildren, presented their activities at a sports awards ceremony, and published their story in French and British media. “I have been particularly happy to make presentations to high school students and repay the inspiration I received as a child.

"Now, when so many young people seem to live their fantasies through a virtual world, it is more important than every to show that frontiers still exist in the real world and their exploration and conquest is achievable by average people of a modest background, just like themselves." 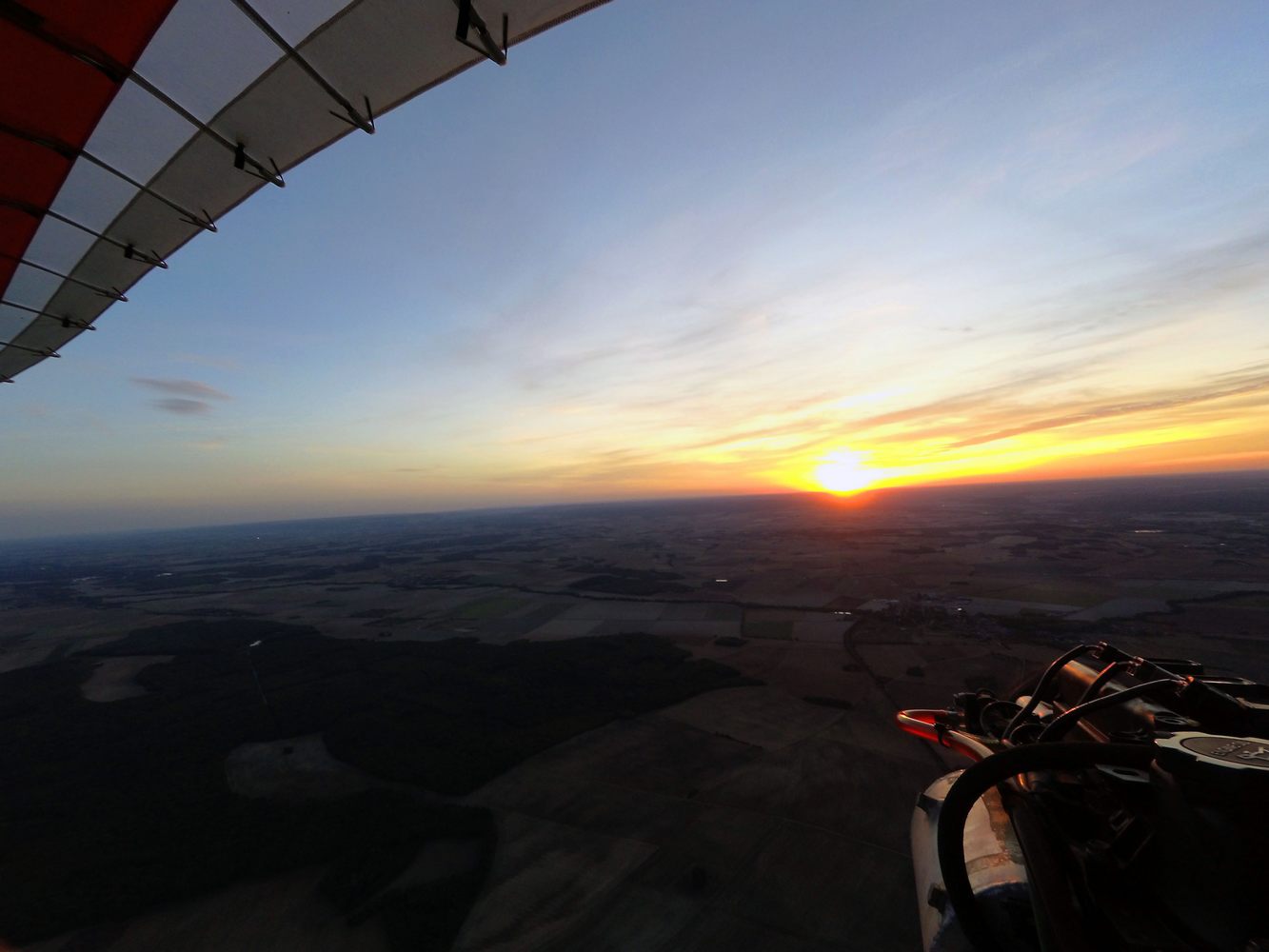