On the 8th of September 2018 we will be celebrating the 55th anniversary of the invention of the modern hang glider. The ceremony in Grafton, NSW, Australia, will see the FAI Hang Gliding and Paragliding Diploma given to Pat Crowe, the driver of the boat that towed to celebrity the first ever working model of the hang gliders we know so well.

The first public exhibition of the 1964 Mark 3a Dickenson Wing will also take place. This is the oldest modern hang glider in existence, in the world, the third glider that John Dickenson built in Grafton and the first glider that he sold. This aircraft has been taken out of its bag just once, in 2009 for the purposes of verification since its last flight at Stradbroke Island in 1972. This will be its only exhibition in Grafton, or indeed anywhere, outside of a suitable museum.

The sport of hang gliding really began in only in 1963 when John Dickenson invented the modern hang glider. The glider was robust, able to withstand many crashes and still fly, easy to transport and store. It all happened in Grafton, Australia, when John Dickenson, an electronic engineer and a member of Grafton Water Ski Club, while inventing a kite for the Annual Jacaranda Festival created an absolutely new type of wing.

From childhood John was obsessed with flying objects and, of course, he carefully studied the research work made by his ancestors. So when he was tasked to build a flying ski kite, instead of a traditional five-sided design he created models with high aspect ratio. Later Dickenson recollected that he was mostly inspired by an old aerofoil design that the US space agency, NASA, was working on. John created his own airframe to make the aerofoil suitable for his purpose. He also came up with the Pendulum Weight Shift Control System that revolutionised hang gliding. His other inspiration came from a flying fox – an Australian big bat type animal that has folding wings that allow it to glide perfectly. Watching flying foxes for a long time helped John to complete his design idea. 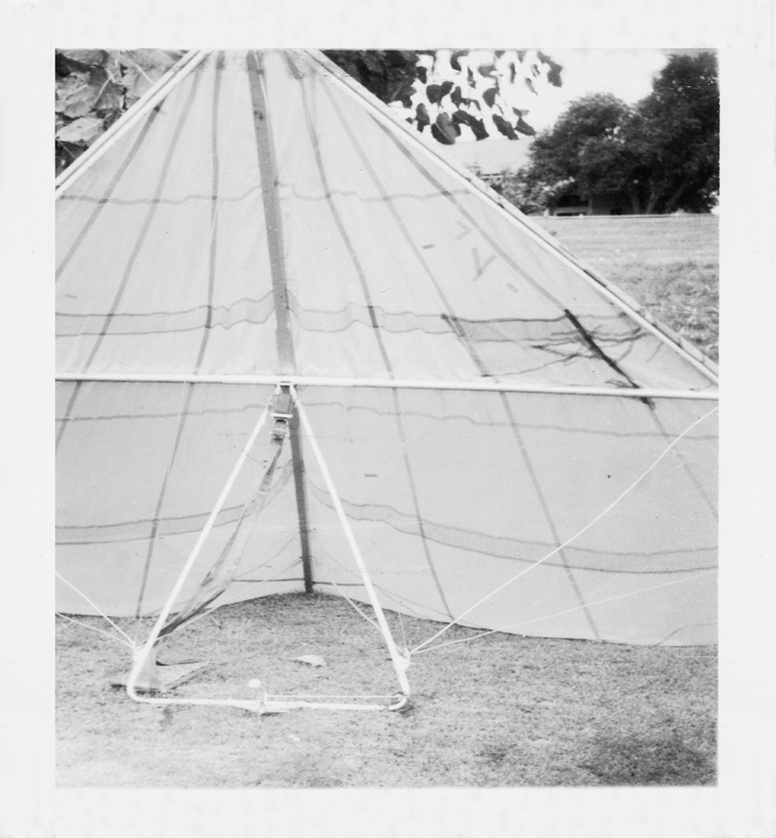 On that Saturday of 1963, the beginning was not easy. At first, John tried to fly the wing himself but they were still adjusting the place of the centre of gravity and it took them numerous attempts to find out where exactly the pilot, the handle and the towing cable should be placed. John was exhausted and suggested his friends  continue attempts. Rob Fuller’s attempt it was a success. He flew over a mile piloting the glider by a control bar. 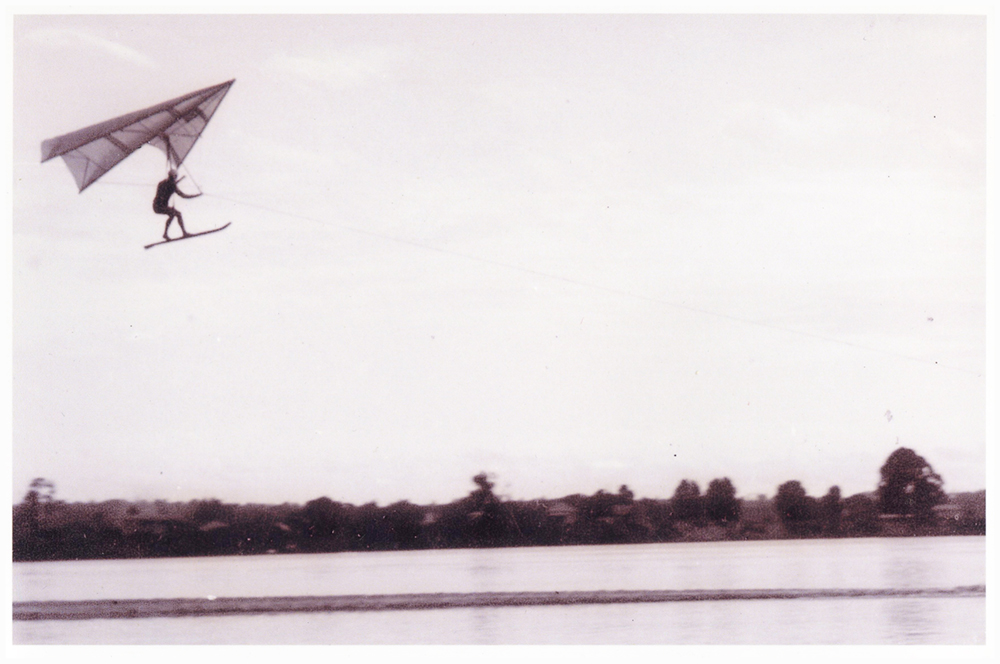 The flight was not eventless: the strong wind gradient had to be mastered, the Grafton Bridge got in the way and the boat had to U-turn. During this time, Rod Fuller was merely the passenger who was enjoying the flight and following Pat. He had to follow Pat, who had total control at all times.  Because of what was learned from the success of this flight, John Dickenson was able to fly later in the day, when he experienced the great little aircraft he had built.

Many flights followed. The tow rope was dropped and the glider free flew. Modern hang gliding was born.

In 2012 John Dickenson was awarded FAI Gold Medal. The Hang Gliding and Paragliding Diploma was awarded in 2007 to John, in 2012 to Rod Fuller and in 2018 to Pat Crowe – the driver of the boat that towed the first ever working model of the modern hang glider. 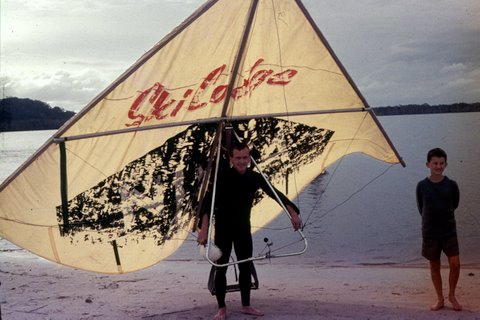 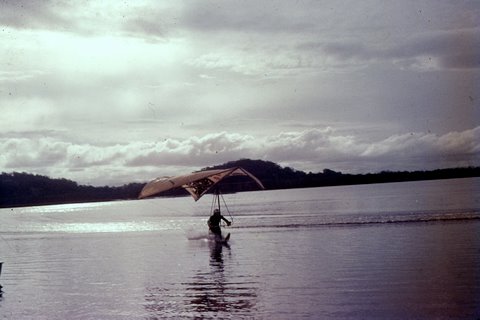 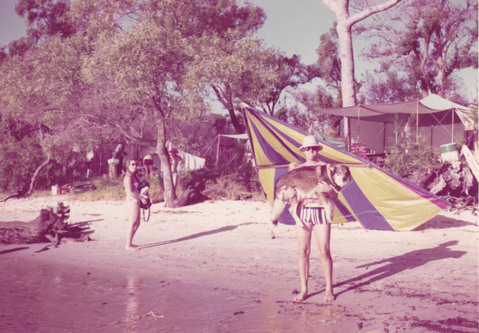 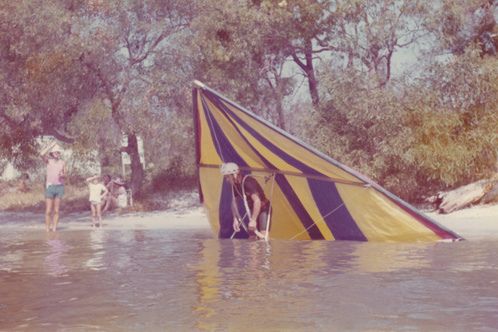 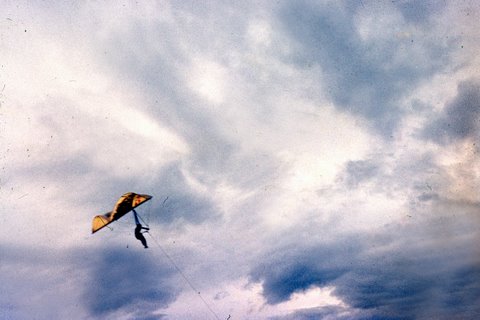 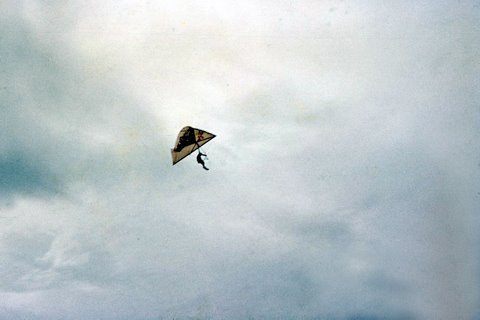