Snowmass Balloon Festival takes place annually the second weekend in September in Snowmass, Colorado, USA. The field elevation is 8200ft: true mountain flying. The event is limited to 35 balloons due to the small flying area in the valley. Our launch location is a small baseball field in the valley next to Snowmass Club Golf Course. We fly several competition events for those who wish to participate. The other pilots choose to float the valley. The vistas are spectacular and landowners very accommodating.

This year was my 10th year as Balloon Meister for the Snowmass Balloon Festival. Preparing for the 2020 Snowmass balloon festival turned out to be more challenging than anticipated during this year’s pandemic.

Preparations for the festival begin a year in advance, working with the town of Snowmass and Snowmass Tourism.  A team of four women and myself meet throughout the year to iron out the details to improve the event each year. Planning for the much-anticipated 45th anniversary of the event was exciting.

Then, halfway into the planning year, COVID-19 erupted.  Discussions took place as to how it would affect our event. Thinking that the pandemic would be under control by September, we kept the plans intact with minor adjustments. Then it became clear that as the summer rolled on that we were in jeopardy of having the event cancelled.

Unfortunately, the Snowmass/Aspen area was hit extremely hard by the pandemic early in the outbreak. Pitkin County Health Department reacted quickly and shut everything down in April. As the Governor of Colorado realised that the tourist season would bring many visitors to the state for the summer season, he shut down the state and asked that tourists stay away.

There were stages to opening back up and we were barely in Stage Two at the beginning of August.  This meant that no gatherings of more than 50 people outside were permitted, 50% occupancy at restaurants/retail shops was ordered and mask wearing was a must. During mid-August we remained in Stage Two. The decision had to be made to cancel the event or make major modifications to hold the Balloon Festival. We discussed the issues and determined that we could have a safe, fun event for all with those modifications in place. 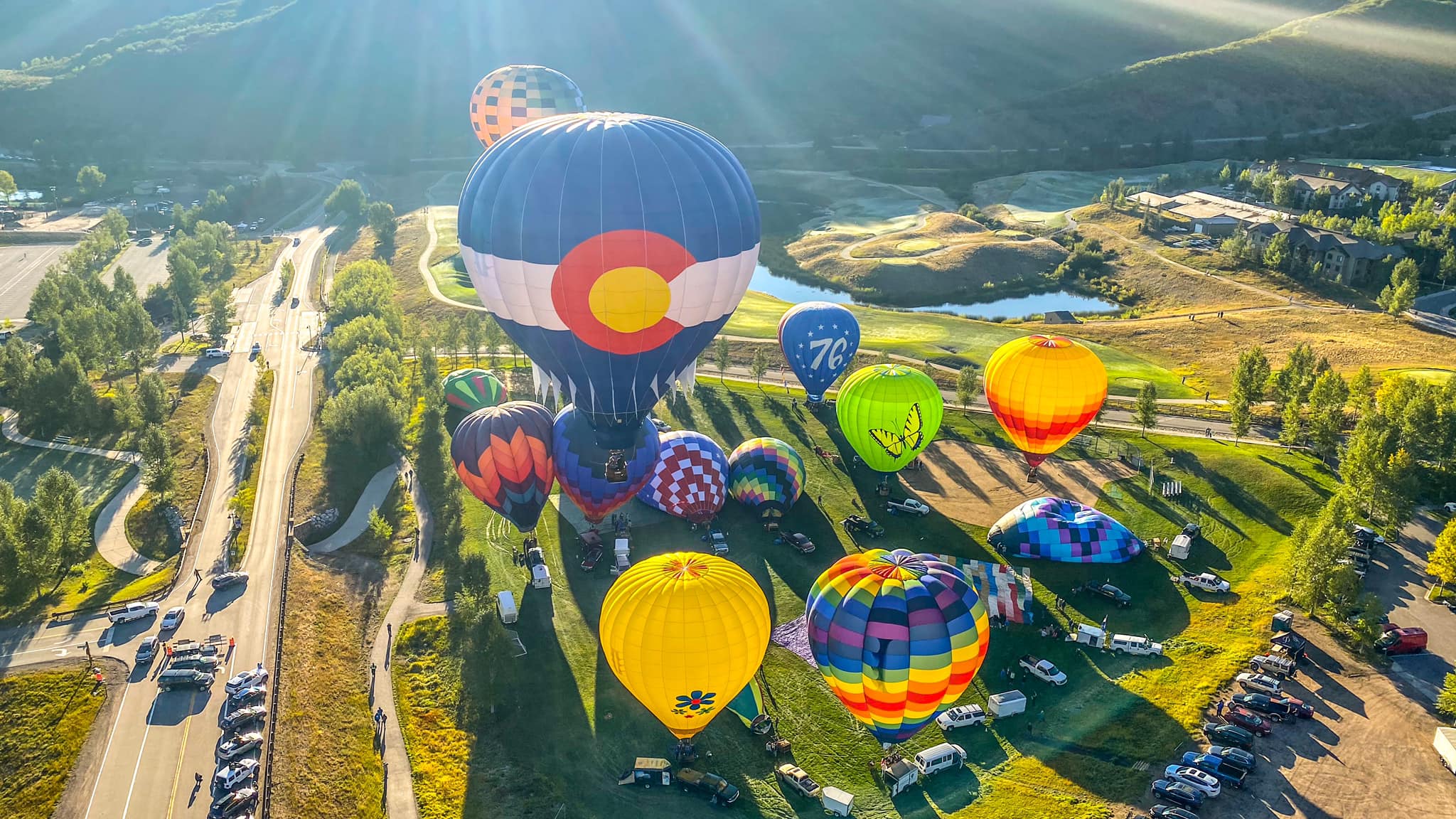 Launch field with the "Colorado High" balloon front and center

The Snowmass Tourism Department worked tirelessly with local fire officials, health department and police to get our plan approved. The implemented plan included:

Turnout for the event was outstanding. We had 32 balloons attending.  Weather was cooperative and we were able to fly two out of the three mornings. The balloon glow was so successful that the organiser is considering this format as a permanent fixture of the event.

This has been a difficult year for everyone. We have lost family and friends to COVID-19, the economy is devastated and there is uncertainty in the future. It was so nice to have a few events and something to look forward to attending and viewing. We were incredibly lucky to have a community that wanted to see the 45th anniversary of the Snowmass Balloon Festival take place. Hot air balloons in the sky make people smile!