Today marks the 30th anniversary of an FAI Word Record made by an American pilot described as both “Part Bird” and “Skygod” and who is perhaps one of the finest Hang Glider pilot for tandem or solo flights: Larry Tudor. A fidgety Californian, he has been pushing the edges of how far hang gliders can go since the air sport's early days in the 1970s. During his long career, Tudor set a total of ten FAI World Records and the one we are commemorating today has not yet been broken.

On 4 August 1985, Tudor launched his Flexwing Ultralite Product GZ 155 hang glider from Horseshoe Meadows in Owens Valley, California, at 10.15 am. After 8 hours and 15 minutes in the air he landed safely on the highway 361 south of Gabbs. During this flight he gained a height of 4’343 m and exceeded by 3% the previous existing FAI World Record of “Gain in Height”, which was set on 22 July 1981 by New Zealander Ian E. Kibblewhite by 3% (4’175m).

US pilot Kari Kastle, one of the most decorated women in hang gliding, record holder and multiple champion herself, on what makes the record so special: “The altitude gain record is very limited because of our legal height restrictions, so my thoughts about this are simple:  Someone had to do it. Congratulations Larry!”

Owens Valley, the Hang Gliders Mecca and a perfect place for a World Record

The summits of the White Mountains and the Sierra Nevada, which Tudor overflew, are higher than 4.000m and the deepest American desert between them, the Owens Valley, is one of the world’s most famous locations for flying. The sky in this region is known for radical turbulences and past experiences have shown that it can take years to get the perfect weather conditions. Kari added: “The timing has to be just right in order to launch at a low enough altitude and get up high enough without going over 17,999 feet (ca. 5.500m). Pilots must stay below 18,000 feet above sea level for air space restrictions without prior clearance.” In fact, pilots call the “Owens” the world’s greatest thermal corridor, because the gyres of air that rise out of the canyons can be enormous and strong.

So it is that this particular geographical and weather configuration has allowed many world records to be set and sky sailors from around the world still flock there during the summer months for their longest and highest flights.

A sports bum born to fly

Larry Tudor was born in 1954. While growing up and graduating from high school in Denver, Tudor was a passionate juvenile chess champion. He achieved an expert ranking before retiring from tournament play and discovering hang gliding in 1973. He used to always equate the mind game with the air sport: "It's like chess," he said in an interview by the Outside Magazine in 1995. "You build a strong position, you try to keep safe, and you anticipate where you want to be." Tudor’s birdlike similarities clearly appear when he takes the wing and so it is not surprising that his adventures in hang gliding are almost uncountable: He was the second person to fly 100 miles (around 160km) and the first person to fly 200 miles (around 320km) in 1983. In autumn 1986, he and American pilot Steve McKinney became the first pilots to fly a hang glider from the West Ridge of the mystical Mount Everest.

In this challenging region Tudor always seemed to be as comfortable in the air as on the ground and to understand the skies so well. "In fact, I get neurotic when I don't fly", he mentioned in the same interview. Kastle stated, “When I think of Larry Tudor I think of a legend in our sport. I think of him as someone who loved the sport and was so driven to succeed in both competition and record setting that he inspired all of us by doing so.  He was a driving force in my own motivation to set world records back in those days. He and his energy was contagious!” He is surely one of the best hang gliders, cross country pilots, and a true pioneer of his sport.

In the 30 year old record file Tudor in his flight statement in his own hand: “Flew along the Sierras until Big Pine and crossed to Black Mountain on the White Mountains (low point). Flew along the Whites until high point at Boundry Peak. Continued through Nevada until forced down short of my goal of Gabbs, Nevada.” 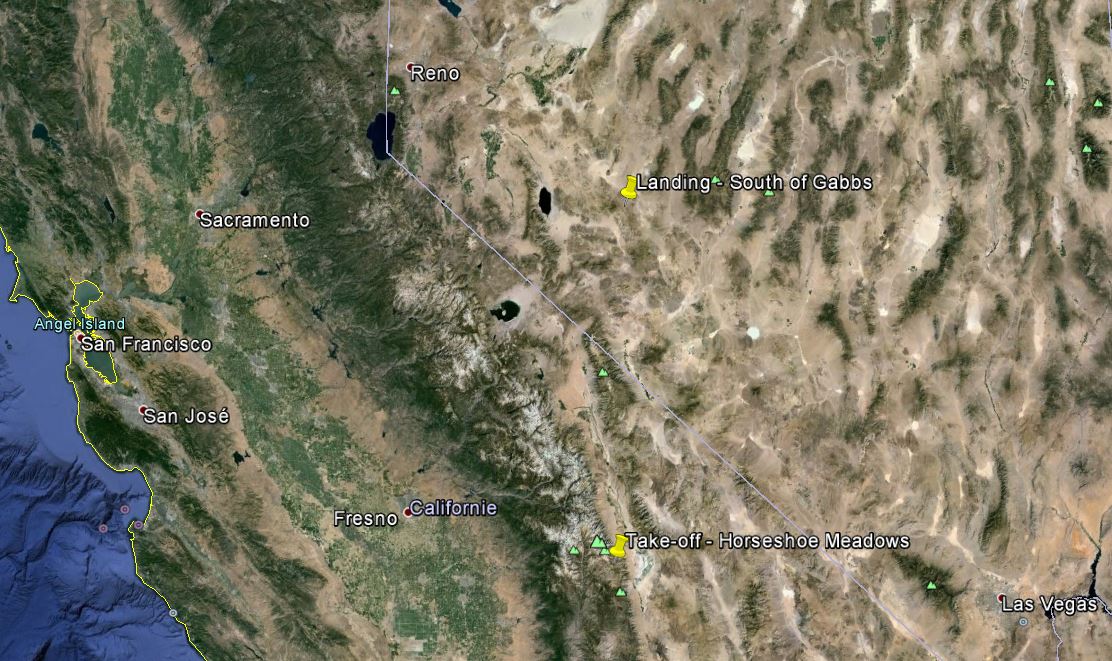 This article is available in English , French , German , Spanish and Russian  (PDF format).