20 Years Ago: NASA’s Space Shuttle breaks a world record for the longest time in Space

Twenty years ago on 7 December 1996 the US Space Shuttle Columbia spent a record 17 days in space – the longest ever Shuttle mission.

Twenty years ago today astronauts on board the Space Shuttle Columbia woke to a familiar song.

It’s traditional on NASA’s manned space missions to wake the crew with a different track every day, and this time someone down in Florida was clearly showing they had a sense of humour.

“Please, come home for Christmas,” by Sawyer Brown rolled through the Shuttle, and it couldn’t have been more appropriate.

Launched on 19 November 1996 after a near three-week delay, and in orbit for a record-breaking 17 days, the astronauts were already late in coming home.

Poor weather back on Earth, in both Space Shuttle landing locations, meant the decision had been made to keep the Shuttle in orbit for first one extra day, and then a second. Fog in Florida and high winds in Nevada meant the five astronauts, four men and one woman, continued to circle the planet long after they should have landed.

However, their enforced exile in Space did have a silver lining: it meant they beat the world record for the longest Shuttle mission ever flown, clocking up 17 days, 15 hours and 53 minutes. When they landed on 7 December, Christmas really was on the horizon.

Kenneth D Cockerel was Commander of what was NASA’s 80th Space Shuttle mission, and the Columbia’s 21st Space flight.

Once back on Earth it was he who signed the official FAI dossier when NASA applied for the world record three months later.

He declared: “I hereby certify that I was aboard the above vehicle at the time it was launched from Earth’s surface, remained onboard during the period stated herein, and returned to the Earth’s surface at the location indicated below.”

The ‘above vehicle’ was the Columbia, marked, according to the dossier, with the identifying marks, “USA flag and words ‘United States’ and ‘Columbia’ on the Fuselage and Wings.”

That dossier, the original of which is kept in the archive at the FAI head office in Lausanne, includes a unique flight report written by Commander Cockerel. In it he details how two planned Space walks had to be cancelled because of a mechanical problem with the exit door.

“The outer airlock hatch could not be opened due to what was later determined to be a jammed latch actuator.” In layman’s terms, a screw had backed out of its thread, jamming the latch from the outside.

He drily adds: “Considerable effort was made by the crew and the flight control team on the ground to find a way to un-jam the actuator. No solution was found.”

Despite the failure of the Space walks however, the mission was otherwise considered a success. Numerous experiments were carried out and a satellite was launched using the Shuttle’s famous ‘robot arm’. That required flying the Shuttle manually, to keep the robot arm and satellite in view – a considerable feat of skill at 300km above the surface of the Earth in zero gravity.

The official FAI World Record that was awarded to the mission was a ‘World Class Record’ in ‘Class P, Aerospacecraft, Category P2 (Orbital flights)’.

The flight launched from and landed at the NASA Kennedy Space Centre, Florida, USA. It launched on 19 November 1996 and landed on 7 December 1996 – back in plenty of time for Christmas. 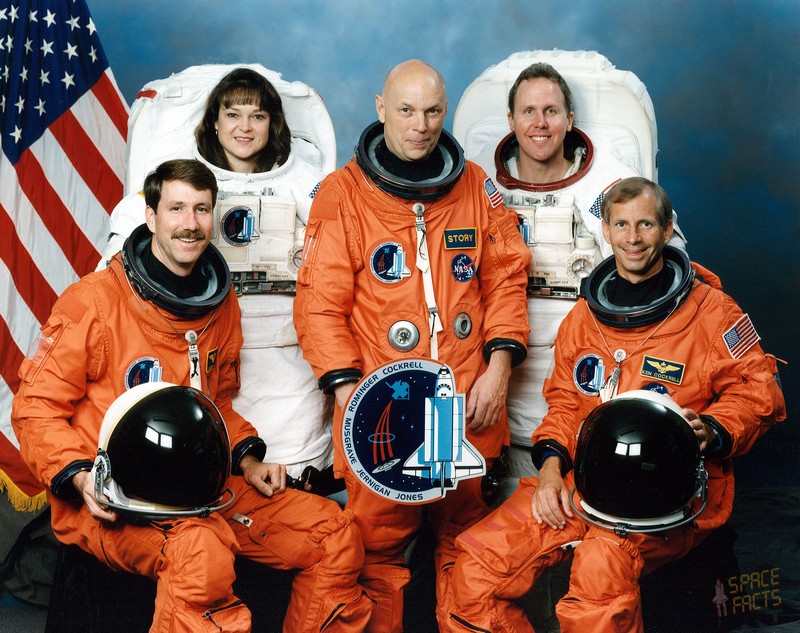