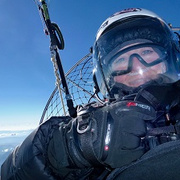 Karen Skinner was born in the UK and first took to the air in a microlight aged eight, with her uncle. After moving to Spain, Karen discovered a school offering a paramotor course and learned to fly, appreciating the advantages to flying a paramotor: "Within a couple of weeks training, you are flying. Also, you can store a paramotor at home, without the need for a hanger. They are easy to transport in the back of you van and you can fly foot launch or with wheels (trike)."

With a head for heights and a taste for speed, since starting to compete in 2004 Karen has taken the paramotor world by storm and has an impressive eight world paramotor records to her name. In acknowledgement of her achievements, Karen was presented with the FAI Ann Welch Diploma, not once, but twice, for distance and altitude: in 2015 for the world record of 6250m altitude in a Paramotor on 6 June 2013, and in 2020 for the distance of 309.93 km over a closed circuit without landing.

One of her hopes is that through her record attempts, her achievements will encourage more women to participate in the sport of paramotor:

"When I started in competitions, I was surprised that not many females were taking part. Back in 2009 there was the disadvantage of the weight of the equipment, so I imagined that the weight of the engines could be a factor in female participation, but I decided to investigate a little more and I found out that whilst paragliding did have a female category, paramotor didn’t, so my new mission became to change this. At that stage women were not included in the international teams from their countries; there were only six places available and all of them went to the top six which were all men, as the male pilots were better. The only way women were going to get better and have the support of the federations was to have a female category.

I would like to add that I never wanted a separate category – I believe it’s important that we compete against men, to see the evolution of women in paramotor. Today I think that the female pilots have proven this point, there are a few of us that have won tasks overall which proves that one day we will see women on the general podium! Certainly, in the first year that the female category was created we achieved more world records then the men, 12 in total!

The satisfaction I get when I have achieved something in paramotor that no other female – or in some cases male – has ever done, is incredible."