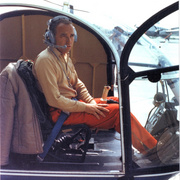 Jean Boulet was a French helicopter pilot who made 23 FAI world records during his legendary career as a test pilot.

He trained in the USA and became a pilot in the French Air Force, eventually becoming a test pilot for Aerospatiale. During his time at the company, he made the absolute record for altitude on 21 June 1972. Boulet reached the altitude of 12,442m in the lightened SA 315 Lama 001 helicopter. Built by Aerospatiale, it derived from the Alouette II with a Turbomeca Artouste III B engine.

Boulet’s ten logbooks, which cover a period around 8000 flights between 1948-1975 were donated to the ‘Espace Air Passion’ Museum in 2022 by Jean's son Olivier Boulet, to be scanned and digitised to make them available to a wider audience.