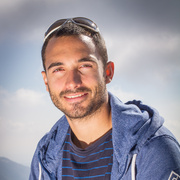 He got the flying bug aged 14 from his father, who had been a pilot since the late 1980s but had given up the sport when his son was born. “For my father it was fun. He liked the social side, but for me, I wanted to win,” Honorin has said.

He learnt to fly on the coastline and in the flatlands of Normandy, France, but moved to the Alps to focus on flying as he became more involved in the sport. Once there he soon found his way onto the French national paragliding squad, under the direction of legendary French hang gliding and paragliding coach Didier Mathurin.

He rose quickly through the ranks, coming third in the Under-21s French Paragliding Championship in 2008, and becoming French Under-21 Champion in 2012.

Away from the competition circuit Hamard has also set several paragliding world records. Flying solo he set a declared flight to goal, 423.5km, in Brazil in 2013. Also in Brazil he set three tandem records flying with his girlfriend Karine Gras, on flights that took 11 hours. They also pushed the record for longest straight-line tandem paragliding flight to 403km.

A professional paraglider test pilot he flies 600 hours a year.