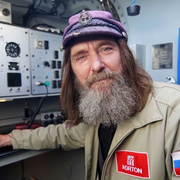 Fedor Konyukhov was awarded the FAI-Breitling Pilot of the Year Award 2016 for flying a balloon solo around the world.

Born in the village of Chkalovo in south east Ukraine on 12 December 1951 his father was a fisherman on the Sea of Azov. As a youngster he attended a nautical school in Odessa and became a specialist in polar navigation, subsequently working as a navigator and marine engineer.

He spent three years in the Soviet Navy as a Marine before studying for an art degree. He has worked as a professional artist ever since, becoming the youngest then member of the USSR's Union of Artists in 1983. He also studied for the priesthood and is an ordained priest in the Ukrainian Orthodox Church in Moscow.

In the 1990s he took up mountaineering and set his sights on competing the Seven Summits – climbing the highest peak on each of the seven continents. Between 1992 and 1997 he climbed Mount Elbrus, Everest, Mount Vinson, Aconcagua, Kilimanjaro, Kosciusko (Australia) and Denali.

He climbed Everest again in May 2012, to mark the 20th anniversary of his first ascent.

His ascent into the world of ballooning royalty and the exclusive club of round-the-world balloonists was swift. He only had 250 hours flying gas and hot air balloons before setting off from Australia on 12 July 2016 to fly solo around the world. He then spent the next 11 days in a closed capsule little bigger than a bath tub.

His route took him east, across Australia, out towards New Zealand, and over the Pacific.

Hitting the coast of South America he soared over the summit of Aconcagua, at nearly 7,000m the highest mountain on that continent.

His journey then took him on into the Atlantic, where he battled through thunderstorms, racing along at 200km/h at heights of up to 10,500m.

From there, he crossed the Indian Ocean – and it was here, in a thunderstorm, that he genuinely felt afraid for his life, as he feared the balloon would be destroyed. He followed a deep, circuitous airflow that took him in a loop to 60-degrees south, where below he could see icebergs in the sea.

Finally turning back north, and after spending 268 hours and 20 minutes in the air alone, he touched down almost where he had launched from – back near the town of Northam in Western Australia.