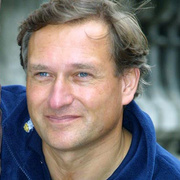 David Hempleman-Adams is a British adventurer who has set many world records. He is the only person to have travelled to the magnetic and geographic North and South poles and was the first person to hold the ‘Adventurer’s Grand Slam’ – the 7 highest peaks on 7 continents.

Not only is he a mountaineer, polar adventurer and sailor, but he is also a record-breaking aviator. During his career he has completed more ‘first’s than any other pilot and has held 47 FAI records.

His illustrious flying career began in 1998 when – with only 30 hours flying experience – he became the first person to make a hot air balloon flight across the Andes mountains.

Next on the list was to complete a journey that had been first attempted in 1897 by S.A Andrée – to reach the North pole by gas balloon. Thankfully, David succeeded where Andrée and his crew tragically failed and became the first person to fly over the North pole in a balloon in 2000. The flight, in a Rozière balloon, took 132h22m.

Preferring to fly in an open wicker basket, David enjoys the low-tech element of gas ballooning and being part of the aviation community, which he says is “very close, very supportive”.

He holds records in the AA, AM, AX, BX and fixed wing aircraft categories, holding records in altitude, distance and duration.

More recently, David has become involved in sailing and in 2016 made a circumnavigation of the North Pole to highlight the climate crisis, as previously the route has been blocked permanently by ice. In 2019 he sailed solo across the Atlantic.

Following is a list of his most major aviation achievements: