Fairness and fraternity at Paragliding Worlds in Krushevo

Krushevo is a well-known flying site with a large number of flyable and sunny days. The Task Committee (Idris Birch, Helmut Eichholzer and David Ohlidal), with the help work of the Weather and Safety Director Martin Jovanoski, set 100-km-average tasks. 128 662 kilometres were flown - more than three times around the Earth!

Goran Dimikovski’s organisation was on a roll and high technological level. Ulrich Jessop took care of the scoring, using the PWC formula and CompCheck. Ivan Lukanov supervised live tracking and retrieve and was helped by Flymaster’s Cristiano Perreira. The live trackers have become an essential tool for safety, retrieve and scoring. CIVL has bought a fleet of 170 trackers that Cat 1 organisers can use for free. It includes the provision of devices together with data and technical support. The organisers can use Flymaster's retrieve functionalities available free of charge. It consists of a web interface that shows live tracking data in real-time, alerts landings and SOS messages. It manages participants status and assigns transportation. Once a bus receives an assignment, the driver gets a link to a map with the location of pilots to pick up and pilots receive information that a bus is coming for them. Retrieve system has 2-way communication with participants via Telegram chatbot that automates a lot of manual operations and ‘speaks’ to pilots in their languages. Philippe Broers, Ruth Jessop and Toni Pljakoski took care of the media.

The championship can be separated in two: the first half with fast speed, tight gaggles and close arrivals; the second with more options and, as tiredness set in, more spread pilots and surprising winners, one with a 13 minutes lead! 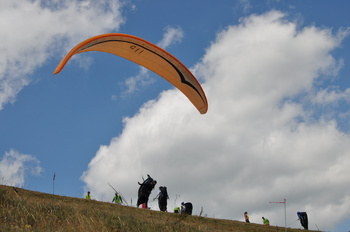 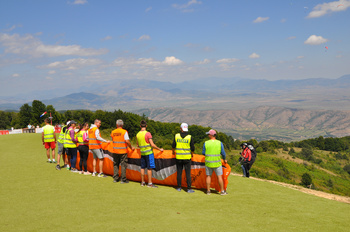 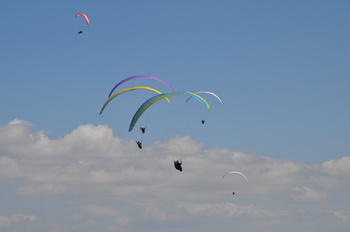 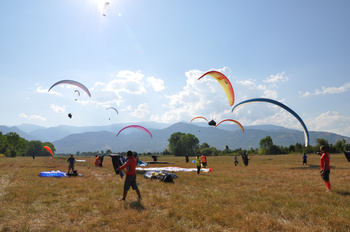 In the end, the top ten pilots all came from different nations. This was analysed by Goran as a tremendous success for the CIVL Competition Class paragliders, all ‘safe, fair and satisfying’. Safe: the gliders performed very well even in turbulent conditions. Fair: an affordable certification allowed ‘small’ manufacturers to be present at the championship; all gliders flown were widely available to anyone in all sizes. Satisfying: CCC gliders are performant and predictable flying machines. The CCC glider quality has been a key factor in raising the skill level of pilots worldwide.

The 150 participants represented 49 nations. Ireland, Philippines and Bosnia and Herzegovina were for the first time in a World Championship. 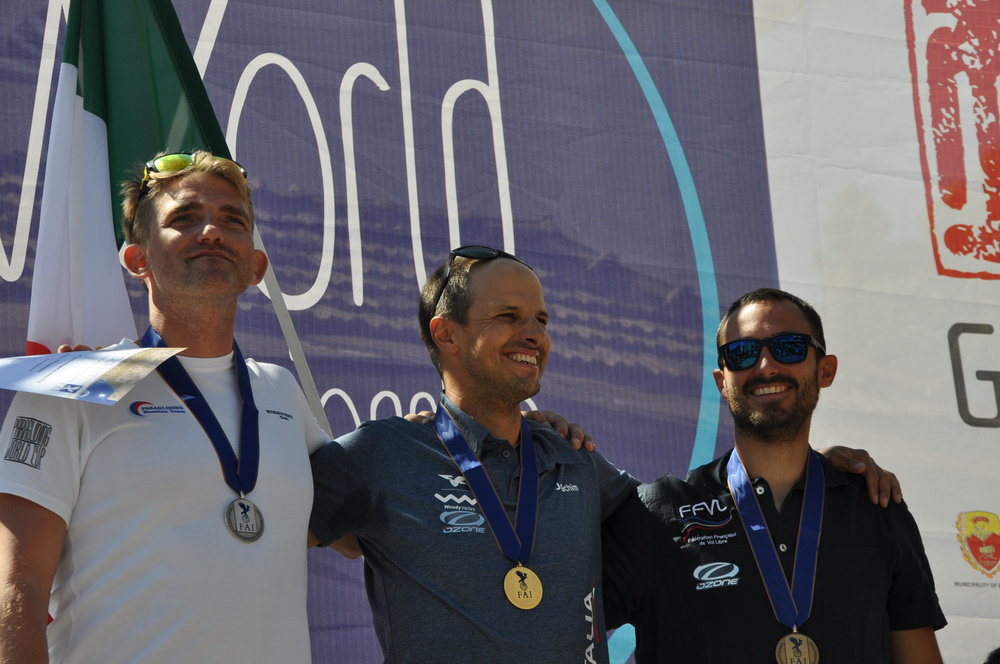 Joachim Oberhauser (ITA) never had a bad day and won overall with quite a margin (90 points) over Gleb Sukhotski (RUS), the first time ever that Russia is on a podium. Two points behind, Honorin Hamard (FRA) is again on the podium, after his 2015 Gold and 2017 Bronze. Then we find seven pilots in 15 points: a tight race!

Women! There were 21 pilots and 20 scored for their teams. In the top three teams, each woman scored at least twice. CIVL recommends promoting women’s flying in your country if you want to have a chance to be a World champion! 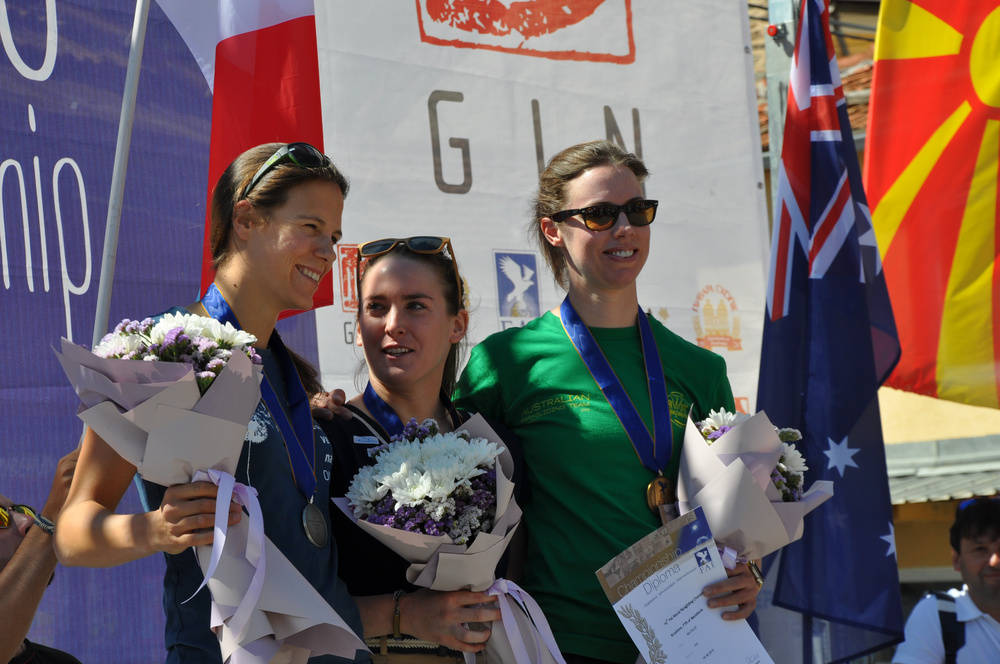 Teamwise, we can’t say that there was stability, although France seemed to dominate with 5 tasks wins. But Italy scored huge one day. Japan, Slovenia, Czech Republic and Brazil also showed their strength. In the end, France and Italy sharing first place gave us wonderful symbolic podium pictures. Japan was third, for the first time on the team podium (but after 6 individual podiums). 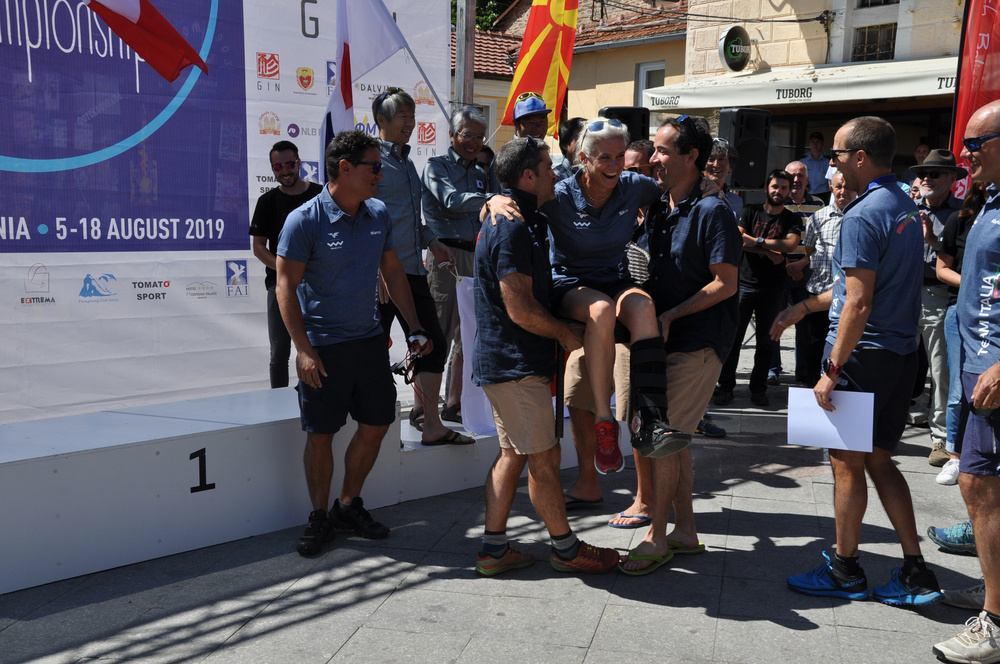 French pilots Charles Casaux and Julien Wirtz are bringing to podium Italian pilot Silvia Buzzi Ferraris, who was injured but continued flying in the competition.

See you in 2020 for the Pan American in Brazil and for the European in Serbia!